Him Law Splurges on 6-Figure Bag for Tavia Yeung 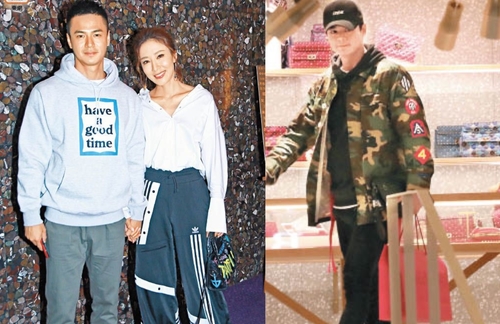 Married couple of over two years, 39-year-old Tavia Yeung (楊怡) and 34-year-old Him Law (羅仲謙) are known to be a loving couple despite often being separated for work commitments. While they have publicly expressed on multiple occasions that they are ready to have a baby, the distance can be a challenge. Thus, Tavia has slowed down her job intake to focus on her health while Him does not have to start filming for his web drama until next month. Other than working out and spending time with his wife, he was spotted on a shopping spree for Tavia yesterday.

Although Tavia has previously complained about Him not buying her any flowers on special occasions, he still knows to spoil her from time to time. Yesterday, he was seen having lunch with a male friend by the ocean, and seemed in good spirits, smiling the whole time. They stayed for an hour before heading to their next destination.

The two guys went to a shopping area full of high-end goods in search of gifts for Tavia. Once they entered a luxury store, Him went straight for the new collection of clothes and handbags, frequently asking the salesperson for advice and often going on his phone as if he was searching for something online. He left empty-handed and went to another store, but ended up not buying anything and returned to the previous store. He finally bought a handbag from the new collection for six figures.

While he was leaving with his purchase in hand, he bumped into an acquaintance and politely chatted with them, at times smiling at passersby who recognized him. Afterward, he continued to shop at a nearby mall, popping into the brand name stores. He went into one store and immediately showed the clerk something on his phone to inquire about something. Then he went over to the women’s shoes and picked up a shoe to check it out. The salesperson hurriedly used the computer to check for stock but he left when the color or size he wanted was not available.

Perhaps he is spoiling Tavia with gifts to give her encouragement. Hopefully, good news is just around the corner!