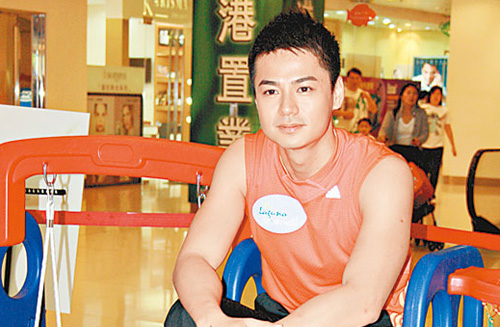 Rising star, Him Law (羅仲謙), was currently filming Hong Kong TVB drama, Mother to Mother <巴不得媽媽>, with Liza Wang (汪明荃). Although portraying a handsome character in the drama, Him recently suffered side effects from taking drug medications. Him referred to his current bloated face, “I look like a bread superhero!”

Several days ago, Him Law fell sick and had a fever. His family forced him to take time off from work and see a doctor. “After taking the medication, my face got a bit swollen.” In order to quickly reduce his face’s swollen appearance, Him will diligently massage his face and lymph nodes to reduce water retention.

Since Him rarely fell sick in the past, he thought that his body may have suffered allergic reactions to the medications. Perhaps his recent grueling filming schedule while filming for TVB drama, Mother to Mother, may have worn out his immune system.

Him Law’s ex-girlfriend, Theresa Fu (傅穎), returned to Hong Kong two weeks ago. Last August, Theresa had accused Him of cheating in their former relationship and even beating her. When Theresa was asked whether she had any advice for Him’s currently rumored flame, Tavia Yeung (楊怡), Theresa said that it was inappropriate to comment on other people and had no advice to offer. It was best for Tavia and Him to let things develop naturally.

Theresa deflected further questions regarding Him Law, indicating that she did not wish to discuss the past; it was more important to look towards the future. Him Law had brushed aside last year’s “cheating and beating scandal” in the same manner.

Despite professing that she was currently single, Theresa revealed that she had numerous close male friends. Theresa also denied rumors that she was the third party in Jordan Chan (陳小春) and Cherie Ying’s (應采兒) marriage, maintaining that she will never be a “third wheel.”

Jayne: I suspect Him Law got sick after filming day and night in his new TVB drama. His career is definitely on the rise, while Theresa Fu is banished to China and rarely returns to Hong Kong anymore. Theresa gave the correct PR reply when asked about Him and Tavia.