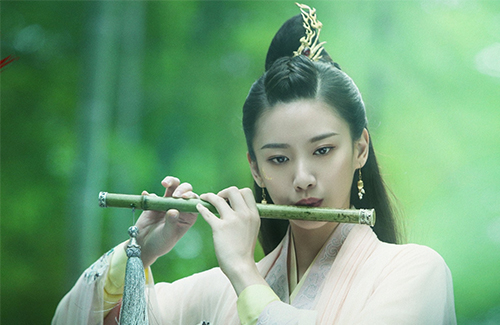 Quite a few HK artistes have managed to successfully break through the mainland market in the last few years, including William Chan (陳偉霆), Charmaine Sheh (佘詩曼), and Wong Cho-lam (王祖藍). But when it comes to rookies, only one has made it into that list.

Scouted in 2015 by a talent agency, 25-year-old model-actress Angela Yuen (袁澧林) made her debut as a supporting actress in ViuTV dramas. In 2018, she was cast as Ming He, the second female lead in the mainland Chinese drama Listening Snow Tower <聽雪樓>. Cold-blooded, mysterious, and love-struck, Angela’s role became a hot favorite among fans, surpassing even the popularity of the drama’s first female lead portrayed by Crystal Yuan (袁冰妍). 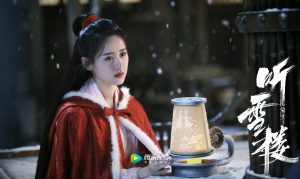 Listening Snow Tower, based on the novel of the same name, is a wuxia drama that centers on the adventures of Xiao Yiqing (Qin Junjie 秦俊傑), master of Listening Snow Tower, and the love of his life Shu Jingrong (Crystal Yuan), both who vow to destroy the dark Baiyue Sect and its leader. Meanwhile, the leader’s daughter Ming He (Angela Yuen) struggles with her feelings for Qing Lan (Han Chengyu 韓承羽), Jingrong’s sihing. 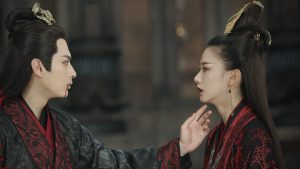 Qing Lan and Ming He

Fans and netizens have since criticized Crystal’s performance as Jingrong. Unable to evoke the strong-headedness and coldness of Shu Jingrong, critics have said Crystal made the character seem much weaker than what she actually is. Crystal has responded to the criticism on social media with positivity, expressing that she has considered every praise and criticism and is looking for improvement.

On the other hand, Crystal’s underperformance allowed Angela to shine—playing the second female lead, Ming He was the simple-minded daughter of Baiyue Sect’s leader, Hua Lian (Jessican Hsuan 宣萱). To protect her love, she defied her mother’s orders and the sect’s loyalty. It wasn’t until after her mother’s death when Ming He started to change—more ambitious, more cunning, and more possessive. Ming He’s impressive character arc and development made the role one of the most popular characters in the series, and Angela a rising star.