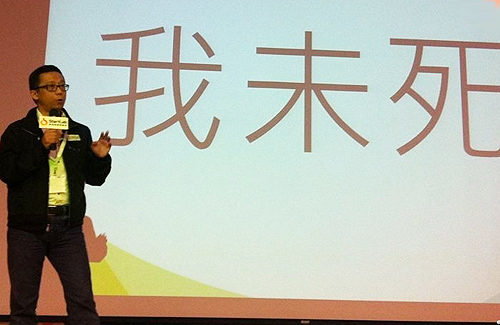 In a surprise move on October 15, the Hong Kong government announced that Ricky Wong’s (王維基) HKTV, which had invested more than $900 million HKD in television operations since its establishment in early 2012, was not approved for a free television broadcasting license. Its close rivals, Fantastic TV of i-Cable and HK Television Entertainment Company of PCCW however, were granted approval and their services will be able to operate in the television market as early as 2014.

Public outcry ensued after the government rejected HKTV’s license application. HKTV, which has invested in the production of over 10 television dramas since early 2012, once pledged to be TVB’s biggest rival in television entertainment. Their bold statements have accumulated many supporters who were against TVB’s monopoly to join their cause.

On October 16, a day after the announcement, Ricky Wong declared that 320 HKTV employees, mainly from the news and variety programming departments, will be laid off this month. Sources say that 25 employees from HKTV’s news department have already left. However, the 120 staff members of TVB origin, such as scriptwriters and producers, are currently not considered to be part of the layoff list.

Numerous Hong Kong artists have taken to their Weibo, Facebook, and Instagram pages to voice their support for HKTV. Over 470,000 people showed their support for station in a Facebook page entitled “Ten Thousands Unite! Approve HKTV’s [free TV] License!” and demanded the government to explain why HKTV’s bid was rejected. A protest will also be held on Sunday, October 20 at 3 p.m., in which protesters will assemble at Hong Kong’s East Point Road and walk up to Hong Kong’s New Government Headquarters located in Central. The protest will be attended by numerous HKTV staff and artists.

In a forum with The Chinese University of Hong Kong held on October 17, Ricky Wong expressed his contradicting feelings toward HKTV’s license rejection. Though he felt “baffled and heavy” about the decision, he is grateful for the support that the HKTV staff and other supporters have shown him.

Once confident that HKTV’s license would be approved, Ricky Wong admitted that he never had a “Plan B” for the troubled station, but at yesterday’s forum with the Chinese University, Ricky stated that he will consider changing HKTV into a production company for television and film. He will also consider selling HKTV’s dramas and scripts to mainland China or other overseas distributors.

In regards to the shaky future of many HKTV staff members, PCCW’s Now TV, Hong Kong Entertainment Company’s sister station, stated that they will approach former HKTV employees and will amass a recruitment list.

Former TVB artist Frankie Lam (林文龍), who has filmed HKTV dramas Hidden Faces <三面形醫>, Web in the Sky <天網>, and Night Shift, expressed in a recent interview with Now TV that he will continue to collaborate with the station in the future and may attend Sunday’s protest. Al Wei (艾威), who has filmed HKTV dramas Once Upon a Song <童話戀曲201314>, Hakka Women <客家女人>, and Hidden Faces, admitted that TVB executives had approached him recently and will consider returning to TVB. “Where else?” he said.

Zac Kao (高皓正) gave a much more extreme response, exclaimed that he will only return TVB if he is in a desperate situation.

92 comments to HKTV May Transition to TV Production Company