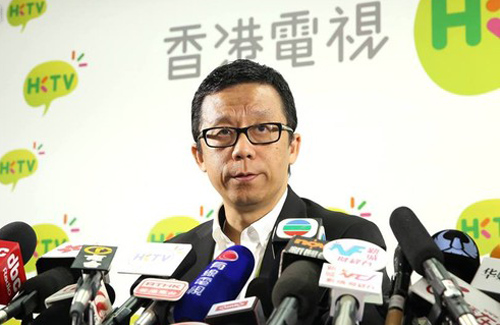 In a press conference held on October 22, HKTV’s Chairman Ricky Wong (王維基) announced that he plans to file for judicial review to challenge the Hong Kong government’s rejection in issuing a free broadcasting license to HKTV last week. Wong claimed that the government had violated procedural justice, as HKTV was rejected although it was not the weakest applicant.

To allow more competition in the television market, Hong Kong’s Broadcasting Authority welcomed applicants to apply for free-to-air TV licenses in 2010. The authority also suggested at the time that three new licenses would be issued. Last week, commerce secretary Gregory So (蘇錦樑) announced on behalf of the Executive Council that i-Cable’s Fantastic TV and PCCW’s Hong Kong Television Entertainment were granted the free licenses, but HKTV’s license was rejected for arbitrary and questionable reasons.

Almost 120,000 people turned up at a rally led by the HKTV staff organizers on October 20. The demonstrators marched to the podium of the Central Government Complex at Tamar, demanding the government to provide a concrete explanation as to why HKTV’s license was not granted. Aside from HKTV’s own artists and production personnel, pro-democrats and non-affiliated HKTV artists – including a few TVB artists – also joined in the protest. The rally was no longer just a protest to support HKTV, but a social movement to fight for procedural justice, transparency in government decisions, and democracy in Hong Kong.

Demands for Detailed Explanation of Rejection of HKTV’s License

Protesters argued that the Executive Council failed to give a thorough explanation and demanded the government to step out with official documents detailing the rationale behind HKTV’s rejection. Chief Executive CY Leung (梁振英), insisted that politics were not considered in HKTV’s elimination.

Before boarding a flight to Beijing today, Leung spoke with the press and stressed once again that the ExCo followed a comprehensive route in determining the licenses. He also implied that HKTV’s business proposal was too aggressive and lacked sustainability in the market.

Leung then stated that the ExCo has to keep its reasoning behind the license evaluations confidential. He welcomed Wong to file a judicial review and said the government would submit its evidence in High Court when the time comes.

Interestingly, despite the government’s claim on confidentiality, the Legislative Council sided with the protesters and urged the ExCo to provide a better explanation. The LegCo said the government should take the public’s response into account, and though the ExCo has an official policy on confidentiality, the ExCo should be able to give out more details to the public. Some former ExCo members even put the blame on Leung, expressing that it is the Chief Executive that makes the final decision. The council only serves as advisers.

HKTV Was Not Weakest Contender

A document about the TV license evaluations was leaked last week, which revealed that HKTV was actually ranked second in terms of government official support and competitiveness. It was reported that a majority of the government officials wanted to issue three licenses, but the ExCo overruled their decision.

At HKTV’s press conference today, Wong reaffirmed that HKTV was not ranked last in its evaluation report despite what the ExCo suggested. He added he is not with any political affiliation, and mentioned that CY Leung’s explanation in regards to HKTV’s rejection was neither comprehensive nor adequate. Leung’s response only further fueled the public’s anger. Wong said he will submit a judicial review in two to three weeks, and believes that HKTV has a strong case that the government had violated procedural justice.

“There have been changes to the game rules. They cannot be changed to favor an individual, the Executive Council, or the three license applicants. There are legal processes in place that Hong Kong has followed for decades. It is not based on one person’s whim to decide the outcome,” Wong said.

The public theorized that Beijing politics may have been the real player behind ExCo’s decision. ATV, known for its pro-Beijing operations, has been financially struggling for the past few decades, yet the government did not revoke their free-to-air license. HKTV’s controversial take on certain subjects may have crossed mainland boundaries.

About 30 HKTV personnel camped out in front of the governmental building on October 22, the organizer’s third day in the protest. They stated that they would continue to stay at the podium overnight until the government formally releases their explanation. The organizers estimated that an additional 5,000 people will be involved in future rallies.

Director Johnnie To (杜琪峯) attended today’s protest and offered his encouragement to the television industry and the Hong Kong public. He added that he was not there to support Ricky Wong or HKTV.

The Hong Kong Professional Teachers’ Union has released a statement to support HKTV’s social movement. They declared that the government’s hesitance in releasing its official evaluation documents has violated the clause of freedom. Its rejection could throttle Hong Kong’s future opportunities in reforming its creative industry, and also limits the freedom for Hong Kong youths to pursue a career in media.