Filming for the third season of popular Chinese variety show, Chinese Restaurant <中餐厅>, has already started. Appearing in the first two seasons, Huang Xiaoming (黄晓明) is back in the third season. Recently, Xiaoming was spotted with TFBoys‘ Karry Wang (王俊凯) and Ashes of Love <香蜜沉沉烬如霜> star Andy Yang (杨紫) carrying a table for the restaurant set-up.

Two days earlier, Karry and Andy were already spotted by media heading to the airport and sharing the same flight to their filming location. Several fans flocked to see the young idol off, and their passionate cheers had Andy making a surprised meme face. She commented that she is also Karry’s fan as well, and this likely made the atmosphere a lot more comfortable for the both, as netizens described the two often interacted with each other on the filming set.

Xiaoming acted like an elder brother to the two and took lead by holding the front of the table during the set-up, while Karry and Andy helped carrying the back. Netizens noted the friendly and harmonious atmosphere among the trio, as Xiaoming warmly greeted them.

After setting up the restaurant, Xiaoming displayed his cooking skills and started making his specialty crepes. His crepes with green onions were well-loved in the previous season and became his signature dish. Netizens said the actor’s cooking skills have grown better and more professional with varied ingredients such as lettuce, bacon, sauce and eggs prepared on the side.

Besides this, there seems to be a change in the restaurant setting this new season, as it is located right on the side of the road. The small establishment is nicely decorated and filled with different kinds of alcoholic and non-alcoholic drinks. With returning and new cast members as well as a new restaurant setting, fans are excited and cannot wait for the show to air.

Chinese Restaurant Season 3 will have 12 episodes and premieres on July 19, 2019. 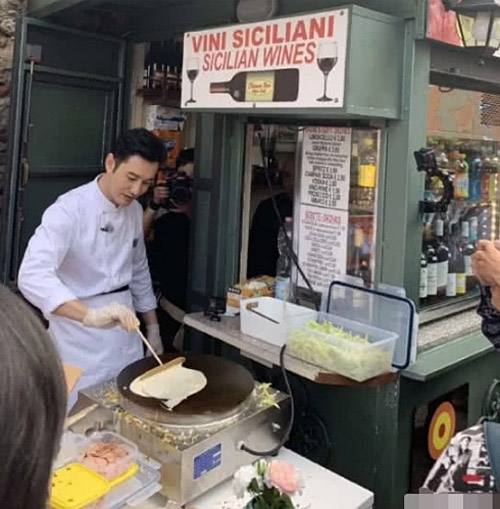