The relationship between alleged couple Hubert Wu (胡鴻鈞) and Alfred Hui (許廷鏗) appeared to be going well until rumors that Hubert is dating Sisley Choi (蔡思貝) started circulating. This inevitably caused a rift in their relationship, as Alfred revealed that Hubert has not been responding to his messages. On March 11, Hubert finally addressed Albert’s comments. 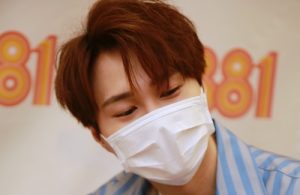 The singer-actor responded to the claims when he made a guest appearance at a radio station to promote his new song “Mortals Don’t Know About Love” <凡人不懂愛>. He admitted that he’s been self-isolating and ignoring everyone’s messages. “Actually, I wanted to give myself more time and space to think about things. I wanted to make good use of the epidemic days to think about the direction of my future, so yes, I have been meeting up with my friends less frequently now.”

When the radio host asked if he contacted Alfred at all, Hubert expressed, “We ask how each other is doing from time to time, but it’s true that don’t see each other as frequently as we did in the past. I haven’t seen the people in my life a lot as well, but Alfred and I are still good friends. I don’t have many enemies in this circle!”

As for whether he sent his blessings to Alfred, whose birthday was last week, Hubert did not directly respond. He only said, “I know he will definitely receive a lot of blessings from friends on his birthday. I saw Joyce Cheng (鄭欣宜) did a birthday live for him, so he must’ve spent his birthday very happily.”