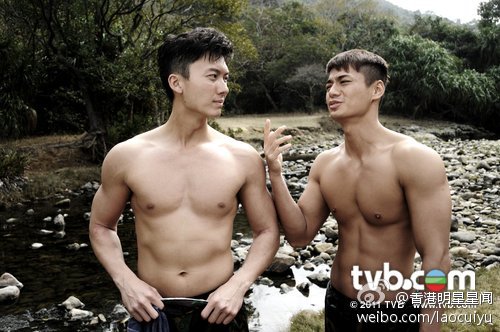 TVB will be airing its new action drama, Tiger Cubs <飛虎>, on Sunday June 24th in Hong Kong! The cast boasts hunky stars, Joe Ma (馬德鐘), Him Law (羅仲謙), Vincent Wong (王浩信), William Chak (翟威廉), and Oscar Leung (梁烈唯) as members of the Special Duties Unit, nicknamed as the “Flying Tigers” unit. The men promised to tear off their shirts to reward fans should the drama’s ratings prove to be exceptional!

Aside from the thrilling action, Jessica Hsuan (宣萱), Mandy Wong (黃智雯), and Christine Kuo (茍芸慧) add to the star power of the cast of Tiger Cubs.

Working in the Special Duties Unit of the Hong Kong Police Department for many years, Chin Ho To (Joe Ma) served as the A-Team leader. Despite his strict demands, his “Tiger Cubs” admired Ho To for his heroic feats and loyalty. Ho To was especially demanding towards subordinates, Yu Hok Lai (Him Law) and Yau Chun Hin (Vincent Wong), hoping to shape them into star performers of the SDU unit.

Although Ho To and Chong Cheuk Yuen (Oscar Leung) were good brothers,  will Ting Wai Wai (Christine Kuo) come between the friends? Wai Wai was originally Ho To’s girlfriend, but she soon falls for the cheerful Cheuk Yuen. To save his friendship with Ho To, Cheuk Yuen even feigns a romance with So Man Keung (Mandy Wong). Will the love rectangle spiral out of control, hurting even more hearts?

Collaborating on a case together, Ho To grows closer to the solitary Chong Cheuk Wah (Jessica Hsuan), the Organized Crime and Triad Bureau (OCTB) Inspector. Cheuk Wah is also Cheuk Yuen’s elder sister. Despite her tough shell, Cheuk Wah was deeply scarred by the death of her ex-boyfriend, who was killed by dangerous criminals many years ago. Ho To glimpses into Cheuk Wah’s wounded heart and sees flashes of himself. A special bond forms between the pair….

Tiger Cubs promises thrilling action and big explosions. Hunky TVB actors will flaunt big guns as they combat the most dangerous criminals in Hong Kong! Sporting a massive tattoo on his neck, Kenneth Ma (馬國明) will guest star as a dangerous bank vault robber  who takes hostages on a bus. This may be Kenneth’s most ruthless character in his career to-date!

Joe Ma and Hunky Cast to Tear Off Shirts

If the ratings for TVB drama prove to be exceptional, Joe Ma promised to lead the male cast in tearing off their shirts to reward fans! Sporting an enviable 42-inch muscular chest, Him Law quipped, “If the ratings of Tiger Cubs are ideal, I will support Joe Ma! I will join the men in showing our muscles!” However, Him said that he lacked the time to exercise his body recently, so he will need to train for a fitter figure before revealing his muscles.

Causing a media circus earlier, wealthy gay businessman, Lau Ding Sing (劉定成), claimed that he had photographed numerous muscular actors in topless photos. Aside from Him Law, it was revealed that William Chak had addressed Mr. Lau as his “Godfather,” who happened to have paid for William’s birthday party expenses.

Mr. Lau allegedly claimed that he had also photographed Joe Ma for his private viewing pleasure. Joe replied, “I started working as a model when I was 18 to 19 years old. My first fashion show was for a swimwear brand. Of course, I have shot swimming briefs photos! But I do not know Mr. Lau! Does he wish to drag the entire Tiger Cubs cast into the scandal?”

Each episode of Tiger Cubs will run 90 minutes, in which an independent case will be featured. TVB spent a splashy $10 million HKD to produce each episode of the drama. The 13-episode drama will first air on Sundays in June, before expanding its broadcast slot to include both Saturday and Sunday evenings.

TVB described the production of Tiger Cubs to resemble a television movie, due to its high production cost, length of episode, and show format resembling overseas syndicated television series.  Since I-Cable secured the broadcasting rights of the London 2012 Olympics this summer, Tiger Cubs was TVB’s answer to strengthen its weekend ratings .

Jayne: Female audiences may need to stay home on weekends to watch Tiger Cubs! More than anything, I wish to see Kenneth Ma as a ruthless criminal!