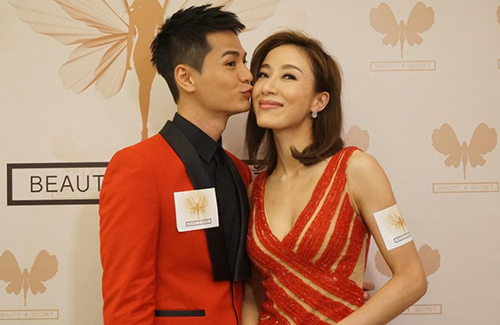 It’s been known for a while now that the Internet’s favorite couple Tavia Yeung (楊怡) and Him Law (羅仲謙) has been working hard on chasing after a baby the past year, but no bells have been sounded until today.

This week, a Hong Kong tabloid broke the news that the couple expecting a baby, and that Tavia is ready for a baby pig. This information is definitely worth celebrating, but according to the couple, the news came as a surprise to them.

“I was shocked when I saw the cover this morning!” said Him. “No ‘news’ from my wife yet, but I do consider [this rumor] a blessing. Thank you all for the concerns! We definitely plan on having kids, but no news yet. We’ll definitely share once we know!”

Tavia said that she has received a lot of congratulations from friends after the rumor broke out. She said herself that she doesn’t know if she is pregnant, but will make sure to notify the media if there is news.

Maybe Tavia is still in her first trimester so she has to keep it hush? Only time will tell!

3 comments to Is Tavia Yeung Expecting?