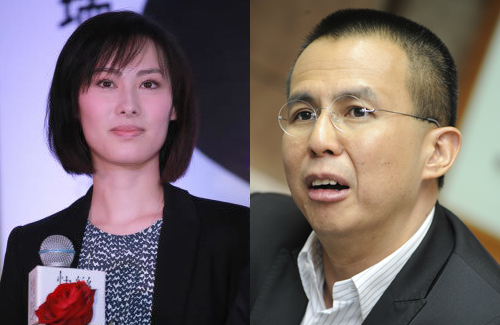 With promised appearances in both Sylvia Chang’s (張艾嘉) film, Nian Nian <念念>, and theater production Sign of Happiness <快樂勿語>, Isabella Leong (梁洛施) hopes to earn her own money to take care of her three sons. The 25-year-old actress denies the popular perception that she has received millions from billionaire Richard Li (李澤楷) after their breakup in 2011.

In 2007, Isabella fell in love with Richard Li, the second son of Asia’s richest man, Li Ka Shing (李嘉誠), prompting her to end her contract with EEG early and take a hiatus in her career. Although the couple never got married, they have three sons together. Often labeled as a gold-digger in her relationship with Richard, Isabella said, “I have been wanting to clarify this matter. What alimony, break up fee? There is no such thing. The relationship Richard and I have is being parents [to our sons]. He did not give me anything, but he has the responsibility to take care of the children. Now that I have a new beginning, I also want to be independent. We will look after the children together in the future. I also want to earn money for the family.”

Isabella also refuted the rumors that she has been on a dating spree since splitting with Richard. She hopes to be a good role model, and is focused on caring for her sons and prioritizing their needs first. Isabella shared that her eldest son is nicknamed Mao Mao while the older of the twins is named Squeaky and the younger one, Fat Pig. She lamented that when she was separated from her sons while filming earlier, the twins got angry and did not want to speak to her for some time. Eventually, her sons understood that their mother needed to work.

A paparazzi magnet since being linked with Richard, Isabella hopes to avoid unwanted attention and raise her children in as much privacy as possible. She intends to raise her sons in Canada, preferring low-key lifestyle away from the Chinese media.