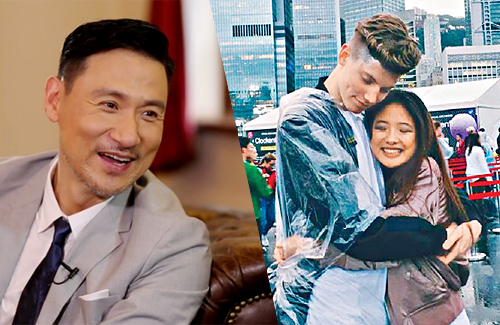 As one of Hong Kong’s music legends, 57-year-old Jacky Cheung (張學友) also has a warm and loving family. Happily married with former actress May Lo (羅美薇) since 1996, the couple has two daughters, Zoe (張瑤華) and Zia (張瑤萓), aged 18 and 13 years respectively. With his busy work schedule and current concert tour, many wonder how he managed to balance his career and family so well. It turns out there is no complicated formula: the secret is love.

Jacky Makes Sure Wife and Daughters Feel His Love

Believing love is the key to family happiness, Jacky once described family relationships with one of his greatest song of all time, “Love is Eternal” <愛是永恆>. He said, “Love is very important. Whether it be to a couple, father and daughter or friends, it is all the same. I always say to my wife that a child who grows under an environment full of love will not become bad. They will know to come home.”

Keeping this belief, Jacky believes that as long as he makes his wife and daughters feel loved, they will understand and learn to cherish the family. Though, he laughs that this method does come in a very cheesy and technical manner, and he is yet to master the skills. Occasionally still facing family problems due to miscommunication, Jacky said there is still room for improvement.

In regards to how he enforces parenting, Jacky said that he treats his daughters differently depending on their personalities. With Zoe being more ambitious, he can remain relaxed, while for Zia, who is less active, he would be stricter.

However, Jacky would never hit or yell at his children, and instead uses reasoning to teach them. He respects their wishes, such as moving his older daughter back to study in Hong Kong from England, because of her homesickness.

Overall, he is a loving father who dotes on his daughters a lot, and would pick up and drop off them to school. Catering to his daughters’ every needs, this had his eldest developing “princess syndrome”, as she can’t even operate a washing machine.

Asked if he is concerned with Zoe’s romantic relationships and public attention in the past year, Jacky said he wasn’t too bothered and pointed out that they’re just her male friends. He also doesn’t mind multiracial marriages and won’t restrict whom his daughters date. “I won’t care too much, there’s no point in getting my approval. Just notify me when you have a boyfriend and it’s fine.”

1 comment to Jacky Cheung’s Parenting Tips: “Children Will Always Return to a Home Filled with Love”