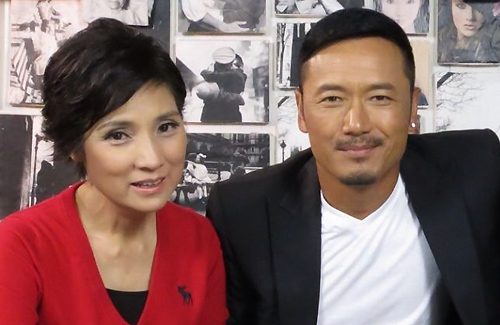 Jamie Chik (戚美珍) is the devoted wife of Michael Miu (苗僑偉) and the loving mother of two children. Jamie and Michael began dating after costarring in the 1982 TVB drama, You Only Live Twice <飛越十八層>. After the couple got married in 1990, Jaime decided to leave her successful TV career and become a full-time mother. After 22 years of marriage, the couple is still very loving and close. Jamie and Michael are considered to be the ideal married couple and are respected by many in the entertainment circle.

In a recent interview, Jamie shared various details about her life ranging from her glory days as a TVB actress in the 1980s, and the wisdom she has gained as a mother and woman entering her fifties.

Not Impressed by Michael Miu Initially

Jamie has many fond memories of the time with her TVB classmates. She met Michael Miu for the first time in acting class. Jamie remembered how Michael and Felix Wong were parading themselves in the classroom trying to get attention from the girls. With their good looks and charm, the girls were mesmerized by the them and kept saying, “Felix Wong is so good looking! Michael Miu is so tall and well-built!”

However, Jamie was not impressed by Felix and Michael at that time. She said to herself, “So what!” and proceeded to ignore them.

Instead, Jamie directed her attention towards her classmates, Andy Lau and Tony Leung Ka Fai. Jamie often met with her classmates at a bar where classmate, Andy Dai (戴志偉) was a part- time singer. Jamie revealed that Andy Lau sang quite a few times during Andy Dai’s absence. Andy Lau always had a passion for singing very early on in his career, and would sing at any event. Therefore, Jamie was not surprised that Andy Lau became one of the Four Heavenly Kings during the 1990s.

After graduating from acting class, Jamie became a cast member of the popular variety show, Enjoy Yourself Tonight <歡樂今宵>. She gained more fame in her portrayal of Ah Chun in EYT’s humorous skit, Shrimp the Tsai Daddy <蝦仔爹哋> along with Louis Castro (賈思樂), Lo Hoi Peng (盧海鵬), and  Meg Lam (林建明). Together with her costars, Jamie brought much laughter to viewers in the 1980s.

Jamie’s fondest and happiest memories in her entertainment career were during her EYT years. She had the best time impersonating singers and actresses. Jaime was very nervous when impersonating pop diva, Paula Tsui (徐小鳳), for the first time. With Ivan Ho’s (何守信) cheering and clapping on the side, Jamie was able to gain confidence to continue with the performance. To this day, Jaime is still grateful for Ivan’s support and they still remain good friends. Cast in her first drama, You Only Live Twice, Jamie started dating Michael Miu in 1982.

Although her relationship with Michael went well, Jamie remained focused on building her career. She later portrayed a number of prominent roles in many classic 1980s drama such as Flying Fox of Snowy Mountains <雪山飛狐>, The Yang Saga <楊家將>, and The Turbulent Decade <黄金十年>. Jamie said acting was quite a memorable experience, as she had to literally start from scratch to create a character.

A Dedicated Wife and Mother

After 8 years of an off-and-on relationship, Jamie and Michael finally tied the knot in 1990. Jamie gave up her successful TV career after the birth of her children. She became a dedicated full-time mother focusing all her energy on her son and daughter.

“Actually, I was never someone with big ambitions!” Jamie continued, “In the 1990s, I didn’t watch any TV series but I spent most of my time watching cartoons and listening to children’s songs. I had no clue of what was going on in the entertainment world.”

Living a happy life with a good husband and a pair of healthy babies, Jamie was satisfied being an ordinary housewife and did not even care about her appearance. Jamie ballooned up to 170 pounds during that period. Alan Tam (譚詠麟) even gave her a nickname “Ho Man Tin Fat Chun” (何文田肥珍). However, Michael never complained about her weight gain. He even jokingly said, “I like my wife when she’s round and smooth!”

Although Michael did not care too much about Jamie being overweight, he was worried that her massive weight gain may affect her health. When Jamie started having pain walking up and down the stairs, Michael bought a treadmill to encourage her to lose weight.

It took Jamie 3 years to lose more than 50 pounds. The gossip magazines wrote that “Fat Chun” was forced to lose weight to keep her husband. Jamie could not care less about the gossip; she strongly believes that a woman should be willing to make the sacrifices for the man she loves and have no regrets.

The Secret of a Good Marriage Many people admire Jamie and Michael’s ability to remain a loving couple after 22 years of marriage. Jamie said there is really no formula to having a good long-lasting marriage.

“The most important thing is: does the couple have the intention to be together forever? If the couple has the same goals, in which everything they do is for the family, then you will do many things naturally. Even if the other person is wrong, you will tolerate him.”

Jamie and Michael are each other’s boss. “Even now I will get permission from my boss, Michael, first before accepting any job. If he said okay then I will do it.” Jamie always put her family as her first priority. She will never accept any job when Michael is filming a drama. Someone has to be around to take care of the family.

Return to the Entertainment Industry

In 2008, Michael had time off between filming dramas, so Jaime made her TV comeback in Born Rich <富貴門>. Since her children are grown up, Jamie is shifting her focus back to the entertainment business again. After discussing with Michael, she became the host for the weekly TVB show, Tasting Life <珍情品味>. The feedback for the show was so good that TVB extended the show with additional episodes.

Recently, Jamie and the original cast of Shrimp the Tsai Daddy put the popular skit back on stage. Being a supportive husband, Michael attended every performance and acted as Jamie’s assistant taking care of her every need.