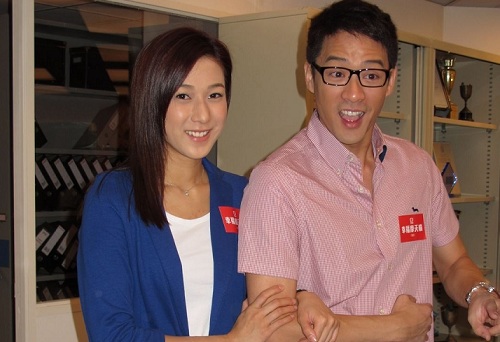 Jason Chan (陳智燊) and Linda Chung (鍾嘉欣) filmed for new TVB romantic comedy, Blissful Ferris Wheel <幸福摩天輪>, the day before. In the crowded Mongkok district, Jason stood on top of a sidewalk rail and declared his love for Linda’s character publicly. The scene attracted dozens of bystanders who watched as Jason made his moving love declaration.

Blissful Ferris Wheel started filming in May and is currently nearing its completion. Partnering together for the first time, Jason and Linda got along well as costars and did not generate any romantic rumors. It was reported that Jason is currently dating 2007 Miss Chinese International winner, Sarah Song (宋熙年), while Linda allegedly had a stable relationship with Philip Ng (伍允龍) for the last five years.

Taking a leading role for the first time in Blissful Ferris Wheel, Jason Chan portrays Linda Chung’s colleague in the Red Cross Tracing Team, in which they work together to locate missing people. Jason and Linda’s characters were out in the Mongkok district, in which Jason lost sight of Linda in the crowd. While climbing on top of a street rail, Jason accidentally bumped his head on a lamp post. Jason completed the scene where he had to publicly shout out his feelings for Linda’s character.

Surrounded by a dozen crew members acting as “bodyguards,” Linda was well protected from the chaotic crowd. Asked if she had received such a public love declaration in the past, Linda said, “My first boyfriend gave me a large bouquet of flowers on the street. I was very moved at the time since both of us are shy people!”