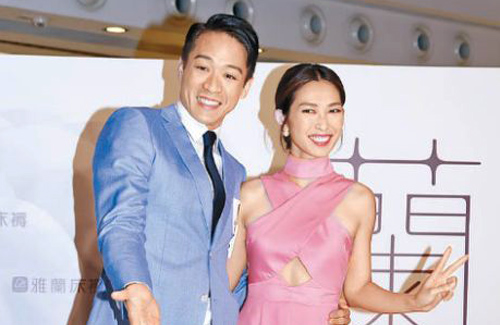 As they were endorsing a mattress brand, the couple was naturally teased about their potential baby-making plans. Jason, who has always been known to love children, was delighted when he heard that the mattress company would be interested in sponsoring mattresses for his entire family. He laughed and said, “Then we’ll be encouraged to keep having more and more children!”

Speaking about collaborating in work as a couple, Jason noted, “We’ve more frequently been engaged as co-hosts for events, which gave us many opportunities for flirting. Sometimes we tend to get a bit carried away and need to hold ourselves back a little!”

He then jokingly lamented, “A few years ago, Sarah started calling me ‘Mr. Chan’ in front of all our friends and my manager, and it made me seem like I was in charge of everything!” Sarah rebutted, “I’ll try hard to coin a second nickname for you!”

The couple revealed that their wedding was scheduled for sometime in December this year but the exact date was uncertain, due to the need to avoid clashing with various award ceremonies that are likely to also be held at the end of the year. On the subject of their honeymoon plans, Jason said, “I initially thought about surprising her, but that would require stealing her passport. She’s also quite ‘promiscuous’ when it comes to travelling…she wants to visit everywhere!” In response, Sarah joked, “At least I’m not promiscuous when it comes to relationships!”