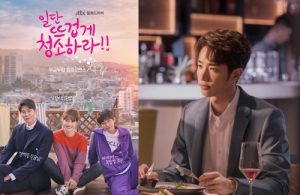 In a recent press conference, it was announced that the popular Korean webtoon Clean With Passion For Now will have a Chinese adaptation, titled Use For My Talent <我親愛的小潔癖>. It will be the webtoon’s second adaptation – the 2018 Korean drama of the same name, starring actors Yoon Kyun Sang and Kim Yoo Jung, was based on the digital comic. Main leads, Shen Yue (沈月) and Jasper Liu (劉以豪), both expressed their excitement for the series online, heightening fans’ anticipation for the drama’s release.

The Taiwanese actor uploaded a photo of A Love So Beautiful <致我们单纯的小美好> star Shen Yue and himself smiling widely while holding red pockets in their hands. He commented, “Met a new friend. Please take care of me.” 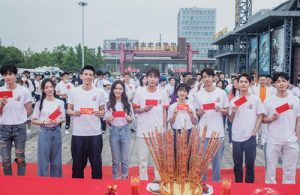 Use For My Talent will revolve around total opposites Gu Ren Qi (played by Jasper) and Shi Shuang Jiao (played by Shen Yue). The story begins with Ren Qi, a cold businessman suffering from mysophobia after experiencing a traumatic event, working to establish his own cleaning company. Along the way, he meets the bright and carefree Shuang Jiao, who often gets herself into messy situations. In the beginning, Shuang Jiao gives up her passion for sports when she loses her mother in a tragic accident. She later moves into Ren Qi’s home and helps him overcome his mysophobia.