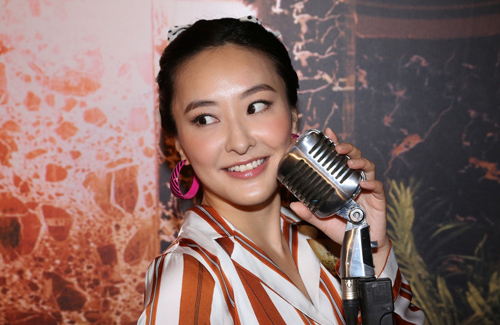 In the currently airing Of Greed and Ants <黃金有罪>, Jeannie Chan (陳瀅) portrays a materialistic character who is obsessed with fame and fortune. She constantly plots to earn more money so she and her family can live better.  While the character is a memorable one for Jeannie, the 30-year-old actress encountered an unpleasant experience while she was filming on set.

On her Instagram, Jeannie angrily wrote, “You didn’t admit that you took a photo of me when I didn’t have clothes on. Then you refused to delete it! You’re not a woman so you don’t understand. What’s wrong with you? You should be ashamed of yourself.”

After the story was posted, a lot of her fans were concerned about what had happened. Jeannie revealed that she had to film a scene where she was only draped in a towel. When she came out, someone took a picture of her. “We told him politely, ‘Jeannie is not wearing any clothes now and only has a towel on. It’s not appropriate for you to take a photo. Can you delete it?'” But the man, who is not a member of the production crew, initially refused to do so.

Out of frustration, she posted the story. Jeannie said, “Only women will understand. I felt violated since it was done without my permission. Luckily in the end, the person did delete the photo.” Otherwise, Jeannie would have called the police.