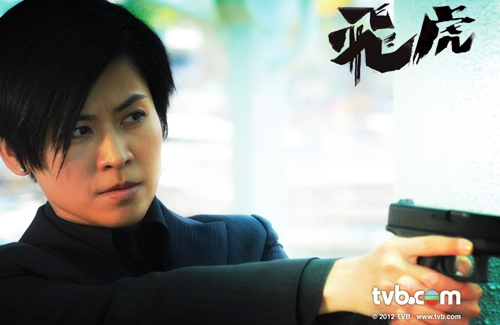 Although airing in a new weekend time slot, Tiger Cubs <飛虎> has pulled in high ratings and even dampening TVB’s rival station, ATV’s program ratings. Yesterday, Joe Ma (馬德鐘), Jessica Hsuan (宣萱), Benjamin Yuen (袁偉豪), William Chak (翟威廉), and Kayi Cheung (張嘉兒) had a party on the yacht to celebrate the good ratings. Everyone came in swim wear and was having fun on the yacht. Compared to Kayi who was dressed in a bikini wear, Jessica was more conservative in a tube dress. Jessica then revealed that she just visited a Chinese physician and should abstain from swimming for the time being.

Other than Jessica, the rest of the cast members had fun with the water sports, and went wakeboarding and a banana boat ride. Dressed in a tight fitting singlet, Joe was having a good time. He even jokingly said that he would go topless if Tiger Cubs’ ratings hit 40 points!

With such good ratings, it is very likely that TVB will film a Tiger Cubs sequel. Joe and Jessica hoped that they will collaborate again, given that they already built their chemistry. Jessica also revealed that she would like to use her “friendship card” to invite her former colleagues, Louis Koo (古天樂), Nick Cheung (張家輝), Gallen Lo (羅嘉良), and Bobby Au Yeung (歐陽震華) to participate in the sequel.

When asked if she had finalized her contractual arrangement with TVB, Jessica revealed that she has not been a managed artist with TVB for quite some time. However, she will continue to sign a per series contract with TVB and will prioritize the filming of the Tiger Cubs sequel.

Playing a SDU team leader in Tiger Cubs, Joe Ma has received many filming opportunities afterward. At a charity premier of The Bourne Legacy, Joe admitted that due to the role, he was asked to star in similar action-packed movies. Joe was also keen to bring his acting to the big screen. There was news earlier that TVB had plans to film a Tiger Cubs movie. Joe said, “It’s not confirmed yet. We did speak about the sequel, but I won’t comment too much. I will leave it to the company.”