Jane, a Harvard student, is an active advocate for women’s rights, and once confessed that her dream is to be America’s president. Her younger sister Jada is also academically exceptional, being a top student at one of America’s best high schools.

In an older interview, Jet had described his wife, former actress Nina Li (利智), as a “tiger mom” who would never give up an opportunity for her children to excel academically. Both Jane and Jada were taught to read and write at young ages; Jet said Jane’s first experience with a teacher was when she was only nine months old. Even then, Nina had complained that it wasn’t soon enough. When Jada turned six months, Nina immediately hired a teacher. 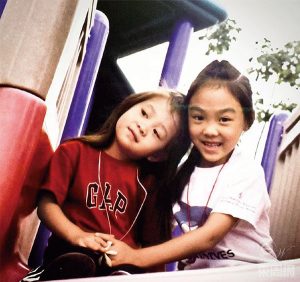 Jet and Nina played good cop, bad cop. While Jet was responsible for taking his two daughters on vacations to learn independence, Nina took on the role as a strict parent with strict rules. Jet admitted that it caused the generation gap between Nina and her daughters to widen, making Jet the mediator between the three.

“I’m always working, and always away. I don’t get to see my daughters often,” he said. “If I was also strict to them, they would hate me!”

As devout Buddhists, both Jet and Nina teach their daughters about the importance of moral character. No what is needed, and what is not. Do not chase materialism.

According to a source close to the family, on Jane’s 18th birthday, her godmother Tiffany Chen () had gifted her a luxury brand outfit, but Jane declined the gift, insisting to buy it with her own money instead.

Jet is very proud of his two daughters, and enjoys spoiling his daughters, only if it’s within reasons. Last year, he agreed to be part of Disney’s live-action adaptation of Mulan because Jada wanted to learn more about the production process of Disney animated films. It has been said that his Disney contract specifically said that it would allow Jada to frequently visit him on set.