Jiang Jinfu’s Ex-GF: “I Was Misled By the Media” 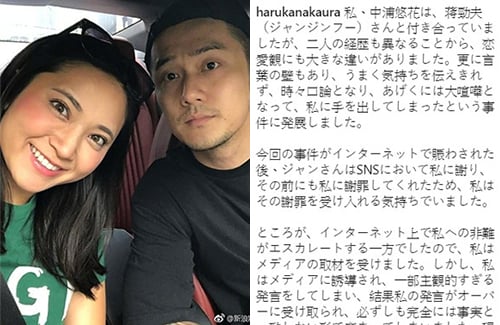 In November 2018, Mainland Chinese actor Jiang Jinfu (蒋劲夫) turned himself into Japanese authorities on the charges of domestic violence. The arrest came after his then-girlfriend, Japanese model Haruka Nakaura (中浦悠花), shared photos of her bruises on social media and told reporters that Jiang was a physically abusive boyfriend.

However, in late December, Jiang’s lawyer announced that the 27-year-old has been released from Japanese detention, and that all charges of domestic violence were dropped. On January 11, Nakura uploaded a statement on Instagram, stating that she is accepting of that decision. She also added a plea, begging the media to “stop their sensationalism.”

Nakaura then confessed that part of the story that was released to the media was untrue, due to sensationalism. She explained that her and Jiang had a rocky relationship, due to different experiences, values in life, as well as language barriers. Conveying their feelings to one another was difficult, which led to fights. Their fights eventually turned more violent, resulting in Jiang hitting her.

Soon after their fight, Nakaura received Jiang’s apology, and she considered accepting it. Unfortunately, the incident broke out on social media, and Nakaura found herself in the media spotlight. Pressured by netizens and reporters, she decided to give an interview.

Nakaura then said she regret doing the interview, as she was purposely misled by reporters to give overly subjective answers that twisted the truth. “Now that it’s been a while, I have calmed down and thought about it. I came out too strong and aggressive. I deeply regret what happened.”

She added, “Originally, it was supposed to be a private matter between the two of us, but then it became such a huge, complicated nuisance that alerted the media. The two of us are now broken up, and I hope that the media will stop their sensationalism. I want to live a peaceful life.” She will consider taking legal action against slanderous comments.

4 comments to Jiang Jinfu’s Ex-GF: “I Was Misled By the Media”