Jiang Jinfu Kicked Ex-Girlfriend Until She Had Miscarriage? 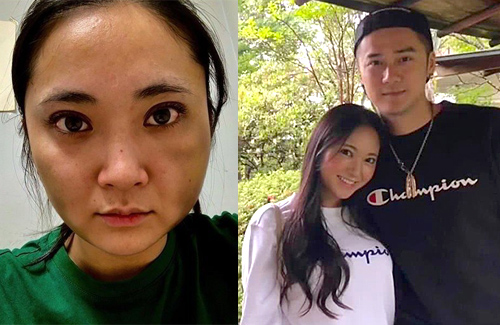 Mainland Chinese star Jiang Jinfu‘s (蔣勁夫) ugly breakup with his girlfriend, Haruka Nakaura, is intensifying each day. In her latest social media post, Nakaura claimed that Jinfu had a violent history and beat her so hard that she had a miscarriage.

Earlier this week, Nakaura posted photos of her severely bruised face and arms on Instagram and accused Jinfu of domestic violence. The 27-year-old actor admitted that he did hit his girlfriend last month, but deeply regretted his actions. However, Jinfu’s friends jumped to defend him, claiming that Nakaura had faked her pregnancy to pressure him to marry her, while cheating with other men.

Jinfu Has a Violent History? 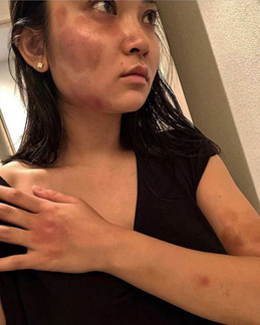 On November 21, Nakaura claimed that Jinfu had a long-running violent streak and had killed their unborn child after kicking her severely. She originally didn’t want to expose the domestic violence incident on social media, but felt this was the only way to make Jinfu responsible for his actions.

Directing her comments at Jinfu, she wrote, “You’ve been hiding for one month, and only want to apologize now? I’ve been waiting for you to contact me, always believing you! And what happened? Waiting for so long, you only apologized on Weibo? I have many things to say to you in person, but it looks like you only pay attention to [social media], so I’ll say it here.

“You kicked my belly so hard, I had a miscarriage. You [kicked away] your own child.” Nakaura continued, “All along, I’ve been trying so hard to help you get rid of your violent tendencies. Together, we’ve both tried to restrain your violence.”

Responding to Jinfu’s friends’ claims that she cheated his money and tried forcing him into marriage, Nakaura wrote, “You’ve deleted my friends’ and family’s contact information. These past four months, I was with you for 24 hours each day. You’ve been holding onto my cell phone. It’s already come to this, how can I meet with other men as they claim? Turn yourself in soon, instead of spreading false information on the Internet.”

26 comments to Jiang Jinfu Kicked Ex-Girlfriend Until She Had Miscarriage?