Becoming pregnant with her second child during COVID-19, Jinny Ng (吳若希) revealed that she suffered in the first trimester of pregnancy. As she is 14 weeks into her pregnancy, the morning sickness is extremely tough for her. “I was literally holding the toilet from 12 noon until 11 p.m. at night! It’s starting to get better now though.”

Appearing as a guest on a radio show to advertise her new single “Love is Priceless” <愛情無價>, this is Jinny’s first public appearance since announcing her second pregnancy and she wore comfortable clothing and flat shoes.

Since Jinny is carrying a boy this time, Jinny’s husband Alex Ho (何兆鴻) is very happy because he loves sports and looks forward to playing soccer with his son. Jinny denied that she had intentionally tried to conceive a boy. “I actually want to have a daughter, but really it doesn’t matter. Our family is not a  billionaire family, so we don’t have a preference for gender.”

Jinny stated that she would like to have a third child if her family environment permits. Raising children requires a lot of financial stability and heart, so the singer felt the likelihood of having a third child is small unless the family immigrates or they increase their wealth overnight.

Due to her pregnancy, Jinny had to turn down certain work opportunities, even a role in a drama. “My company has been very understanding. There has been a decrease in work, but this pregnancy has been hard for me. My body may not be able to withstand working a few days in a row. Maybe because it is a son this time so I get tired after walking for five minutes! I’m currently focusing on promoting my new single and doing less physically-demanding work which will allow me to sit more.”

Since becoming pregnant, Jinny joked that she became “more stupid and has slower reactions,” but her husband has been very attentive. “I can now delegate tasks to him, so I’m taking full advantage of this. After learning of my pregnancy, the first person my husband told was not his parents but rather the post- natal care helper, because the one we had for my daughter was extremely helpful and helped raised my daughter to be very obedient. Luckily, I was able to book her, but there will be a week of overlap with another family. I really understand the importance of the care helper, so I resonated a lot with the drama Who Wants a Baby < BB來了>.”

To prepare for the arrival of another baby, Jinny and her husband has always taught their 3-year-old daughter to accept other children. As her daughter wants to have a sister, she did not plan on sharing her toys with her brother. When Jinny told her that the baby will be very sad without any toys, her daughter gave in and said she can share a few items. 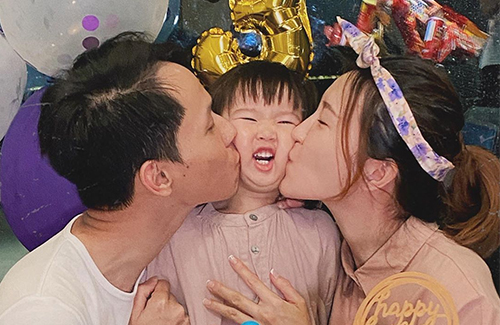 Jinny Ng celebrates her daughter’s third birthday, and we get to see a glimpse of her spacious home.