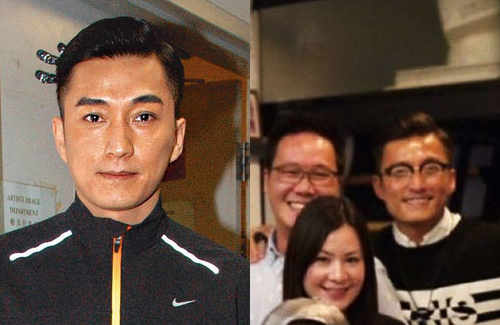 Joel Chan’s (陳山聰) image took a steep dive when he abandoned his wife and career for heiress Florinda Ho (何超雲) in 2011. While dating Florinda, Joel briefly left TVB but returned to acting after their relationship ended in 2013. Hoping not to be scrutinized in his current relationship with businesswoman Apple, Joel hopes to handle the romance in a low-profile manner.

Joel admitted that they are currently living together. Betty gets along well with his family, and his mother is extremely pleased that he is dating. Since Betty is older than Joel, the couple’s relationship has progressed quickly, and they see each other as potential marriage partners. Joel said, “We have mutual goals. At our age, we no longer just want to have a dating relationship; we also want to have a joint lifestyle together.”

Since Joel incurred much negative publicity in his past relationship with Florinda Ho, Joel wants to protect his current relationship with Apple. Joel said, “I don’t want to compare with the past. I don’t want to hurt or affect others.” Asked if Florinda knows he has a new girlfriend, Joel said, “I will not respond over past matters. I have a new start in life now and will try my best.”

Joel’s sister-in-law, Sophie Lee (李碧君), expressed her approval of Apple. “I’ve seen her. She is lovely and proper and speaks very softly. [But] just approaching it with a normal heart. It’s not like they will get married right when they start dating. She does not work within the entertainment circle, so hopefully she won’t be scared off by the paparazzi.”

Sophie shared that Joel has also changed since dating Apple. “He has become a lot more positive. He constantly returns to Macau to visit us. Before, he was always too busy to visit, but he has a little more time now. For example, recently, he only had a few hours of spare time, but still rushed back for tomb-sweeping [during Ching Ming].”