Last year was a wonderful year for Joel Chan (陳山聰) as he experienced personal and professional milestones. He got married to his girlfriend of six years, Apple, and the couple has baby-making plans this year.  With the start of the Year of the Rat, Joel especially went to the wishing tree to pray for health and continued success in his career.

Due to the popularity of Barrack O’Karma <金宵大廈>, Joel’s career got a significant boost and he won the Most Popular On-screen Partnership Award with Selena Lee (李施嬅). His web drama Flying Tiger 2 <飛虎之雷霆極戰> was also very popular in China. With such a fulfilling past year, what is in store for him in 2020?

Viewers can look forward to seeing the actor in three upcoming dramas: Stride <大步走>, Chinatown <唐人街>, and Brutally Young  <十八年的終極告白>. Joking that Ruco Chan (陳展鵬) did not have any dramas aired in 2019, Joel is certain that Chinatown will be a success. He said, “Filming Chinatown was very tiring because it required a lot of physical scenes. No one got hurt but it was straining for the body. I really look forward to this drama. Even though it is a new year, I have the same goal every year. I hope that filming will be smooth and that viewers enjoy my work.”

Joel anticipates filming Barrack O’Karma at the end of the year. Though the producer has confirmed the return of the original cast including Selena Lee, Joel hopes he will be portraying a new character and bring new chemistry to viewers.

Wants to Be a Father 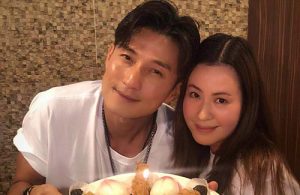 Recently, Joel went to Canada for an event in which he brought his wife Apple so that they could spend time together. However, she did not enjoy the cold weather, so he looks forward to take her to the Maldives for their honeymoon.

Hoping Apple can conceive this year, Joel is excited to become a father. A friend had once told him that aside from his own children, other things do not wholly belong to him. As Joel is only 43 years old, he still has the physical strength to raise children. When his child is 20, he will only be in his 60s.