Just two days before Johnny Huang‘s (黄景瑜) latest drama Love Advanced Customization <爱情高级定制> with Dilraba Dilmurat (迪丽热巴) aired, a shocking revelation by a netizen caused a huge storm. On May 17, news broke that Johnny’s ex-girlfriend Wang Yuxin (王雨馨), who he allegedly married and physically abused, had attempted suicide. An Internet user claiming to be Yuxin’s assistant exposed the suicide attempt and accused Johnny and his studio for “brainwashing” and allowing fans to constantly barrage Yuxin with hate comments.

In the wee hours of May 16, Yuxin made a cryptic post on her Weibo that gained immediate attention and raised alarms of potential suicide. She wrote, “Goodbye to this world that is filled with more than half of the malice. Goodbye to the boy who once loved me, and I once loved deeply.” 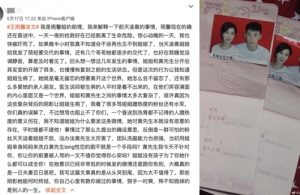 The next day, a netizen claiming to be Yuxin’s assistant confirmed that Yuxin had attempted suicide. She is reportedly in a coma after coming out of danger. The assistant shared, “[Doctors] spent a whole day and night trying to save Yuxin from her life-threatening condition. It was such a frightening day, and I was almost scared to death. I honestly don’t know if I would’ve ever seen her again if I acted 30 minutes later.”

Feeling wronged for Yuxin, the netizen disputed claims that Yuxin is an attention seeker, and expressed, “What’s the whole point of seeking attention when she is still unconscious from stomach pumping? I don’t know why she would make such a post, but she has no hatred for Mr. Huang anymore.”

Allegedly, even though Yuxin left the past in the past, Johnny’s fans still attack her every day endlessly. “Mr. Huang, I’m not targeting you, but does your conscience feel at ease knowing that your ex-wife is being yelled at endlessly?” the assistant questioned.

The netizen then uploaded photos of Johnny and Yuxin’s marriage certificate to back up the claims and the marriage rumors that Johnny previously dismissed. The photos circulated intensely and immediately raised heated discussions online. A news agency contacted the Xiangshui Civil Affairs Bureau to confirm the authenticity of the marriage certificate, however, the bureau office could not disclose any information as it concerns personal privacy. A public security bureau would have to intervene and confirm.

Johnny’s studio has yet to respond to the matter.

“Legend of Anle” is generating explosive buzz due to its gorgeous cast.

Yang Yang and Dilraba Dilmurat’s long-awaited romantic drama will be released on June 27, 2021.