There is a good chance that TVB is considering a sequel for their anniversary drama series Wonder Women <多功能老婆>, which had just ended its broadcast. The romantic drama, which stars Miriam Yeung (楊千嬅), Pakho Chau (周柏豪), Raymond Wong (黃浩然), and Alice Chan (陳煒), is also nominated for Best Drama at the TVB Anniversary Awards.

Jonathan Wong (王梓軒), who plays Jonathan Mui in the series, talked with reporters about the likelihood of a sequel, and should there be one, Jonathan has a good chance of returning.

“I’ve heard about it,” said Jonathan when asked if Wonder Women would have a sequel. “But I can’t confirm it. I will have to ask Miriam after the [Lunar] New Year’s if she has new information. I actually really want to know too, because I know there would be a chance for me to come back. Although my character died, a hint was dropped at the end of the series that I had a twin.” 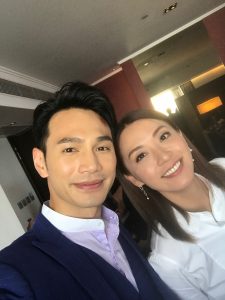 Jonathan hopes that the open ending would leave room for a sequel, and he would love to return to be the twin. “He’ll have a completely different personality, and that’s a very welcoming challenge for me.”

Nonetheless, Jonathan added that it’s also possible that the sequel would be something completely different. “Like a Wonder Men <多功能老公>. Or maybe the same cast, different story,” he said.

While Jonathan did not receive nominations at the upcoming TVB Anniversary Awards, he will be attending the show to support his costars and the drama.

“Every time I am to attend a big event, I always choose a different suit. I’m not nominated, but Wonder Women received 18 nominations. I have to go to support them.”

Playing a couple with Alice Chan, Jonathan said Wonder Women had opened many doors of opportunities for him. “A lot of endorsers are asking for me and Alice to appear together. I do think Alice and I make great partners and we’ll be collaborating in many different styles. I do wish to work with her in a drama again, but performance a duet together isn’t bad either!”