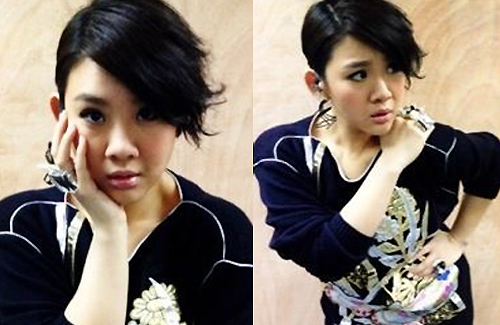 The most notable feature about Joyce Cheng (鄭欣宜) that catches the audience’s attention is her weight loss achievement. In total, she lost 93 pounds, dropping from 230 pounds to 137 pounds. Her successful weight loss slimmed down her entire body, even resulting in a much slimmer face.

Joyce revealed her personal feelings to the media. “Being skinny does not necessarily mean beautiful, and being fat does not mean ugly. I hope everyone knows that no matter how much effort I put into losing weight, my goal was not to become skinny, but rather for health purposes.”

In the past, Joyce had possessed an illness. “At the time, I wasn’t fat, I was obese. It’s an illness. When I was younger, eating was a reward. As I grew older, it became a different matter. Last year, eating served as a way of self discipline instead.” Joyce said.

Recently, people have been pointing out that Joyce is regaining weight. Instead of letting down on herself, Joyce sees this as more motivation to keep fit. “I’m not aiming to become as skinny as Sammi Cheng (鄭秀文) or Joey Yung (容祖儿). I hope young people can learn to appreciate different body shapes, because each person is unique in their own way. If everyone looks exactly the same, you would be unhappy as well, because you’re losing your individuality.”

“My mother always told tell me that if what I say would hurt others, then I might as well not say it. Never hurt others because of their appearance. Maybe many people have never been criticized this way, and they don’t know that this kind of pain hurts more than being stabbed with a knife. A wound from a stab will heal, but many words will forever remain in our memories. I’ve experienced this before. It’s okay when my EQ is high, but when it’s low, I feel like everyone has a baseline and an area of sensitivity. I am sensitive towards being fat or skinny, and my mother is my baseline.”

Back in August 2005, Joyce experienced a frenzied attack from netizens after kissing Ron Ng (吳卓羲) in a show. She was acting as Snow White, and Ron had been the Prince. The amount of criticism Joyce received after the incident was almost unbearable. How did she overcome this huge blow in her career? Joyce revealed, “I learned not to care. If I don’t care, everything becomes less of a deal. That year after kissing Ron, I thought my reputation was over. Friends asked why I was still staying in Hong Kong for further development. I feel the audience cares about me, and they continuously give me chances. At first, it may seem like everyone is criticizing me, but it’s better than ignoring me completely.”

Joyce admitted that she has a rebel personality, but it is her competitive nature that allowed her to overcome all the challenges in her life. It is this side which allowed her to remain strong and keep positive.