Karl Ting (丁子朗) has been heavily promoted by TVB ever since he won first runner-up in the 2016 Mr. Hong Kong Contest. Gaining greater recognition after starring in The Man That Kills Troubles <解決師>, Karl continued to impress with his muscular figure in variety show Sammy On the Go <森美旅行團>. Only 22 years old, the actor’s future is looking bright.

Born in Hong Kong before immigrating to Canada, Karl participated in Fairchild TV’s Project Boyz Power competition, in which he did not place. He said, “Since I was young, I never thought of myself as good looking or had the right body. I was on summer vacation so I decided to join this competition.”

However, in a lucky turn for Karl, TVB executives Virginia Lok (樂易玲), Felix To (杜之克), and Sandy Yu (余詠珊) had attended Fairchild’s competition and saw a lot of potential in Karl. They asked him if he would be interested in joining the 2016 Mr. Hong Kong Contest. Karl recalled, “At the time, I wanted to say no. But the producers told me not everyone has this chance, so I decided to try. I thought to myself that if I failed, I would just return to Canada to continue my studies. I didn’t think I would get first runner-up and still remain in Hong Kong now.” 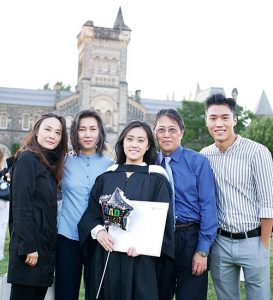 Family Against Karl’s Decision to Become an Actor

With Karl’s sudden fame, his family was not supportive at first because they did not want him to give up his studies in global economics at the University of Waterloo. After further consideration and seeing that this would be a once-in-a-lifetime opportunity, Karl decided to sign with TVB.

While he had many work engagements right after Mr. Hong Kong, he suddenly hit a dry spell without any work for six months last year. His family told Karl that if he were to return to Canada, life would be a lot easier. But Karl thought to himself, “Men are competitive by nature and can’t lose. Even if I have no more money in Hong Kong and have to survive on bread alone, I wouldn’t go back [to Canada].”

Struggling to make ends meet, Karl felt this was a valuable experience to strength his grit. “I realize that an actor needs to be mentally strong. When I don’t have any jobs, I have to learn patience and other skills.” Realizing the value to start from the bottom, Karl said, “I realized my struggles were not very painful…it’s just that everything had gone too smoothly before.”

Working in Hong Kong, Karl doesn’t get to see his family often, but they are always on his mind. Proud that his earnings now allow him to provide a little for his family, Karl realizes he can never repay his parents but he wants to treat them on a trip to Australia. “It’s not very expensive, but it represents my love.”

Karl Ting Gains Notice Through “The Man That Kills Troubles”