Kelly Cheung Opens Up About Boyfriend of Two Years 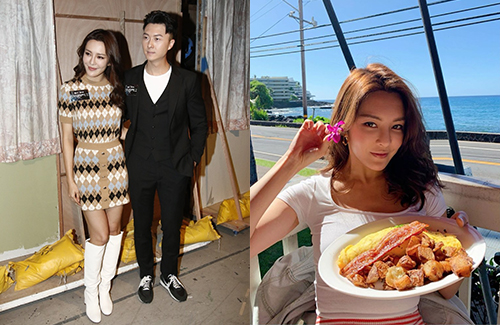 TVB stars Kelly Cheung (張曦雯) and Vincent Wong (王浩信) appeared in front of the press for the blessing ceremony of their television drama Legal Mavericks 2 <踩過界II>, the sequel to the 2017 series of the same name. Kelly, who plays a new character in the series, shares most of her scenes with Vincent, her love interest.

Legal Mavericks 2 is Kelly’s second collaboration with Vincent, who also played her boyfriend in last year’s The Man Who Kills Trouble <解決師>. Unfortunately, Kelly’s character dies early on in the series.

“I hope I won’t die this time,” said Kelly with a laugh. “My role [in Legal Mavericks 2] is quite calculative and more mature. She’s a professional, and honestly quite unlike myself. The producer has to remind me to talk more maturely. My voice usually sounds like a kid. I’ve been learning from [Vincent] a lot about that.”

Vincent responded by saying that while Kelly is often regarded as a goddess, her personality is more like that of a girl next door. “Sometimes she can quite rough too,” he said.

Kelly recently shared on social media that she took a week-long vacation to Hawaii with a foreigner boyfriend of nearly two years. She confirmed that the photos on Instagram were taken by him.

“He can take good photos and he’s filial,” Kelly praised, calling him a good catch. She explained that her boyfriend is not an entertainer, and clarified that she never tried to make it seem like their relationship was a secret. “His photos are uploaded, just never tagged. We have a steady relationship, but it’s not like we’re getting married soon. He did great so I just wanted to give credit where it’s due!”