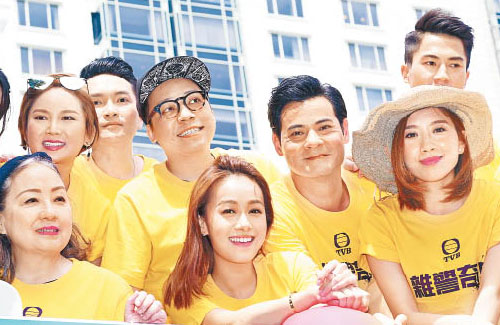 The Mid-Autumn Festival is meant to be a holiday for family and feast, but for Jacqueline Wong (黃心穎), it was a time to catch up on work. Drowned with work, Jacqueline said she barely had time to celebrate the holiday with her own family.

At a promotional event for her new TVB drama Nothing Special Force <雜警奇兵>, Jacqueline was asked if her boyfriend Kenneth Ma (馬國明) had visited her family during the holiday. She sighed and said, “No. I didn’t even have time to spend it with my Daddy. (Did Kenneth at least give you guys some gifts?) No. Our house is already filled with mooncakes. (Did you give anything to Kenneth’s mother?) Sharon Chan was joking around and gave me and Kenneth a mooncake set. I gave them to his family.”

When will Jacqueline and Kenneth see the parents? “It’s a big deal, so let’s wait a little! Maybe around the New Year’s. We can get red pocket money too.”

Jacqueline’s Nothing Special Force costar Mandy Wong (黃智雯) shared that she’s from a big family, so the Mid-Autumn Festival is always the busiest time of the year for her.

Unlike Jacqueline, Mandy did bring her boyfriend to visit the parents. Fortunately, her elders did not rush Mandy into marriage. “Every year I would go back home to eat a meal with my family, and then we would go to the rooftop to pray to the moon.” Mandy’s costar Ben Wong (黃智賢) laughed and said, “Where are you from? Praying to the moon? That sounds like a cult!” Mandy immediately corrected, “I meant to say we would admire the moon!”

Nothing Special Force, a comedy cop drama, premiered on September 24, 2017.