Multi-entertainer Kitty Yuen (阮小儀) is redefining the goddess image. Currently starring in the popular TVB romantic comedy drama Love as a Predatory Affair <愛情食物鏈>, the 45-year-old’s role as the plain-looking but intelligent Lo Kwai-fong is capturing viewers of all ages, with netizens deeming her as the entertainment industry’s new goddess.

With rising popularity also comes the rising interest of the paparazzi. The Hong Kong paps have been actively tracking down Kitty’s daily life, but besides work and meeting with friends, Kitty do little of anything else.

Last Friday afternoon, the paparazzi spotted Kitty leaving her home in Pu Fu Lam with her $340,000 Audi. She took her four-year-old car to an auto repair shop, and one of the car shop’s workers drove her to a nearby salon. That evening, Kitty met up with a female friend for dinner.

Earlier this week, Kitty and her Love as a Predatory Affair costars King Kong (金剛) and Brian Tse (謝東閔) filmed a segment of the latest season of Kitty and King Kong’s food show, Neighborhood Gourmet <街坊廚神>, in Causeway Bay. Fans of all genders and ages crowded around Kitty for photos, and the petite actress kindly and patiently fulfilled all their requests. She even reminded her fans to wear extra layers so they would not catch a cold.

In a later interview, Kitty said she is not making much money out of her increasing popularity—at least not yet. “The market is in a bad shape now. I lost a lot of endorsements and shows. If this happened a few years ago, I’d be so busy! Honestly, I was not expecting [Love as a Predatory Affair] to receive such good results.”

Profits may not have increased yet, but Kitty is definitely a growing millionaire. She revealed that she is currently saving money to buy a million-dollar luxury flat in the Southern District, close to where her family lives. She also shared that she plans to purchase a new Mini Cooper Countryman for approximately $400,000 HKD. “My previous car only had two doors. It’s not enough room for my family. I plan to purchase a four-door car!”

Kitty is currently single, but she has expressed her interest in settling down with someone. “My previous boyfriends were all afraid of the paparazzi. I really want to find someone who is not afraid of them! He doesn’t need to be wealthy. (Does he have to be good-looking?) That’s obvious! Of course! I prefer men with a sunny vibe; I’m not really into the melancholy siu sang look. If he is as sunny as Eddie Peng (彭于晏) then that’s perfect! (What about muscular men?) If he has Eddie Peng’s looks, it’s okay if he has no chest!” 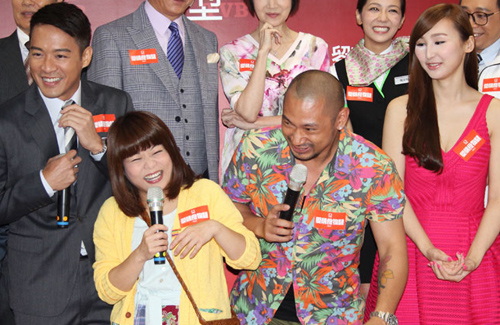 Kitty Yuen will have a love triangle with Jason Chan and King Kong in new TVB drama, “Love Food Chain”.