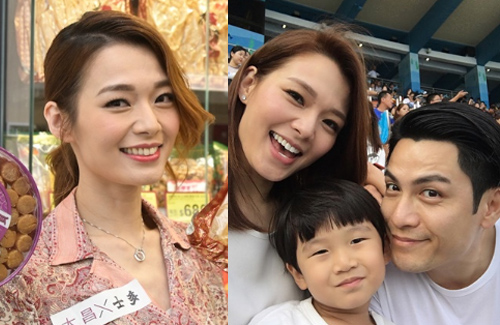 Teaming up with her co-star from Come Home Love: Lo and Behold < 愛．回家之開心速遞 >, Koni Lui (呂慧儀) and Kalok Chow (周嘉洛) attended a ribbon cutting event for a new local snacks store. Talking about her life after divorce, Koni mentions that she still keeps in contact with her ex-husband, Dickson Wong (黃文迪).

Sharing a photo of herself holding a bouquet of flowers on social media earlier, Koni denied that the flowers were sent by a male pursuer and explained that the florist sent them for Mother’s Day. On her thoughts about love after splitting with her ex-husband, Koni said, “I still believe in love, but I don’t have any pursuers right now. I see a lot of happy couples who are still in love.”

Instead of worrying about dating, Koni prefers to concentrate on work right now. She added, “I don’t really have time to think about these things. I’m happy to have received flowers for Mother’s Day and my son also made something for me. I was really touched when he wrote, ‘I Love Mom too’.”

Stating that being a single mom is not too tough, the 36-year-old actress said everything comes down to how you split your time. She is thankful her parents can help watch her son while she is at work, but she will take on full childcare responsibilities after she gets home at night. Dickson still takes time out to take care their son. Koni said she has been discussing plans with Dickson to change their son’s school.

Along with Koni, Kalok Chow has also received increased income from promotional appearances due to their popularity in Come Home Love. Kalok doesn’t have very high standards, but he hopes to earn more money to have a more comfortable life.