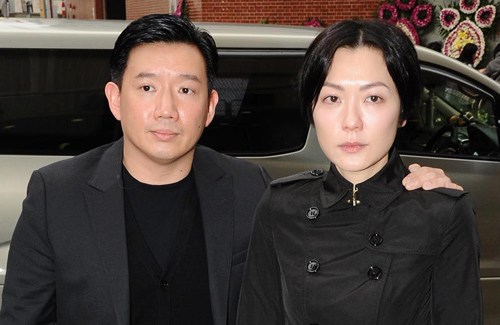 Amid the filming of new TVB comedy, You Who Came From the Meow Meow Star <來自喵喵星的妳>, Kristal Tin (田蕊妮) took several days off to mourn the recent death of her mother, who had passed away in March. Kristal has been reminiscing the moments she had shared with her mother before her death. Posting various old pictures on her blog, Kristal wrote many heartfelt statements regarding their wonderful mother-daughter relationship and voiced how much she missed her. “Great Mother, when I am in your arms, I feel the most safe and happy! I will remember you always! Mother, I love you!”

The memorial service for Kristal’s mother was held on March 25. Grieving for the loss of her mother, Kristal evidently lost several pounds and looked quite haggard. Husband Chapman To (田蕊妮) said, “[Death] is inevitable in life. But when it happens, it’s still difficult to face. I think Kristal needs a little more time.”

As Kristal’s mother has suffered from gastric cancer for two years, the family was prepared that she may not survive. Due to her mother’s situation, Kristal was hesitant when she was offered a role in You Who Came From the Meow Meow Star, afraid that her emotions would be unstable during filming.

However, Chapman told Kristal that it would be better for her to focus on her work rather than grief. Chapman said, “I urged her to continue to work. First, filming a drama involves many people and it’s not good to affect others. Second, there are 24 hours in each day. Aside from sleeping for six to seven hours, it would be better to use the remaining time to focus on work rather than to be in grief for the entire day. This would actually make her feel better.”

The cast and crew of You Who Came From the Meow Meow Star offered Kristal their support during her mother’s passing. Good friends Hins Cheung (張敬軒), Twins, and Pang Ho Cheung (彭浩翔) sent flower wreaths to the funeral.