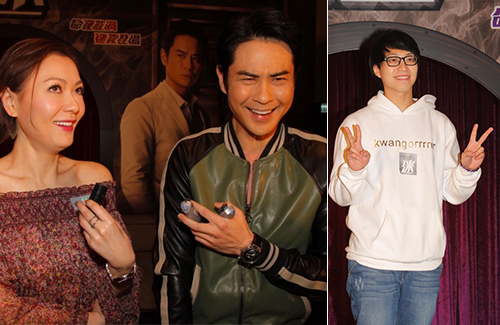 Yesterday, the cast of TVB’s upcoming drama Destination Nowhere <迷> showed up in Tseung Kwan O to promote the drama, which premieres on February 13, 2017. Starring Kevin Cheng (鄭嘉穎), Kristal Tin (田蕊妮), “Kwan Gor” James Ng (吳業坤), and Winkie Lai (賴慰玲), Destination Nowhere follows an unambitious undercover cop who gets helplessly intertwined in a serial murder case. He soon discovers that the person he has been hunting for was by his side all along.

Destination Nowhere is Kevin’s last TVB drama in his contract. Though the actor is not new to detective roles, his character’s sheepish and clumsy personality gives Kevin a new acting challenge to tackle. His character is very gentle with Kristal, whose character has a more cutthroat and fiery personality.

But no matter how gentle Kevin may seem to be on camera, Kwan Gor said Kevin’s aura is still quite deafening. Kwan Gor admitted that he was scared of Kevin at first, and he wouldn’t really talk to him.

Kevin said, “I don’t understand. I don’t do anything, I just don’t talk as much. If I don’t talk, then I have no expression. You can’t expect me to smile all the time for no reason. People would think I’m crazy!”

Kwan Gor immediately explained, “Kevin is a very strict senior, but I’ve always had a fear of serious atmospheres. It’s my personality. I’m also not a very serious person myself, so I don’t know how to respond to that kind of environment.”

Natalie Tong (唐詩詠) and Tony Hung (洪永城) are rumored to have broken up, but Kristal, who recently hung out with Natalie, said she has no idea if the rumors are true.

“We frequently meet up to chat,” said Kristal. “Life isn’t just about romance. It’s also about friends, families, and cats. We talk a lot. So much that she once stayed overnight.”

Kristal joked that she is more important than Tony Hung, but did stress that she doesn’t know if they have broken up. Asking if she believes Natalie’s relationship with Tony would last, Kristal said, “I’m not a fortune teller. I can’t predict what’s going to happen.”