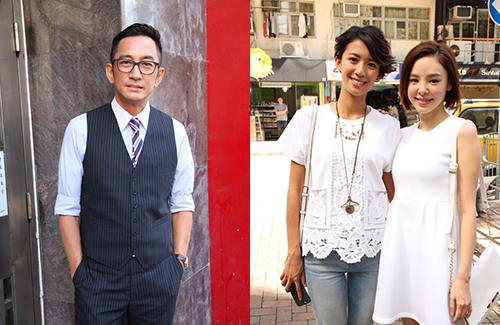 Lawrence Ng (吳啟華), Sisley Choi (蔡思貝), and Zoie Tam (譚凱琪) were at Tai Kok Tsui to film the TVB drama Accident <純熟意外> a few days ago. In the scene, Zoie’s pursuer tries to run her and Sisley over by his motorcycle, but the girls are saved by Lawrence. The scene was quite hard to film, as both Sisley and Zoie were dragged to the ground several times.

When speaking about the fast action scene, the 2013 MHK runner-up said she was more afraid of committing outtakes than getting injured, expressing that she trusts the staff, choreographer, and stunt actors to maintain a safe environment for the actors. “They are all very professional. I am actually more afraid of making mistakes on my part.”

Asking if she has purchased insurance for protection, she said, “I’m not sure if the company bought it, but my family has always been buying insurance for me. I hope I’ll never have to use it.”

Sisley, who starred in the cycling drama Young Charioteers <衝線>, said she would not mind doing more action-packed dramas in the future. “If you give me a few months to train, I don’t mind showing my six-pack abs.”

Rumors say that Louisa Mak (麥明詩), winner of the 2015 Miss Hong Kong Pageant, is dating Sisley’s rumored boyfriend, dance choreographer Shing Mak (麥秋成). Sisley clarified, “Shing Mak and I are friends. I don’t know about [Louisa and Shing], but I don’t think they are together. [She] really worked hard for the Miss Hong Kong Pageant, so I don’t think she even had time to date.”

As one of the hottest television actors of the nineties, Lawrence Ng attracted quite a few fans and bystanders when he filmed at Tai Kok Tsui. The 51-year-old was asked if he has been going to the gym to train his muscles, but the actor laughed and said, “That’s not necessary for older people like me, but I do exercise quite often. However, I would not purposely go to the gym to train.”

Asked on his thoughts about rookie actress Sisley, who made her acting debut last year, Lawrence praised, “She’s extremely intelligent and does not perform like a rookie. She actually seems quite seasoned in many things. She is very qualified.”