Currently based in the US, Leehom Wang’s (王力宏) Wang Da-Chung (王大中) has handwritten a letter to defend his son, alleging that Lee Jinglei (李靚蕾) has ulterior motives for her bombshell-laden IG post, and accuses her of using her pregnancy as a means to marry into the family. Denying that his son has been adulterous, the elder Wang also revealed that Leehom has already ceded to Lee’s requests and paid her alimony fees of up to millions NTD ($80 million HKD).

Attaches Screenshot of A Message From Leehom
Lee Jinglei responded to the letter from her former father-in-law with an Instagram post of six images filled with words, followed by a seventh image, a screengrab of a message (attached below) from “Leehom Wang”. 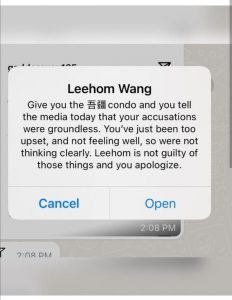 Responding, she wrote that she could not believe that Leehom is threatening her to make a public apology, even using the Taipei mansion worth $4 hundred million NTD ($110 million HKD) to bait her into putting up a show to deny her previous allegations.

Lee Jinglei began her post by saying that she believes Leehom’s father would not know how to contact the media with his letter without Leehom’s instruction, adding that the singer has to bear responsibility for abetment even if he is “hiding behind his father”.

The 35-year-old penned that she had already been very reserved in her nine-page bombshell, on account that Leehom is the father of the kids. “Seeing that at his age of 80 plus, [the] elder Wang still has to stand out and tell these kinds of lies and take this sort of photo, makes me very heartbroken and in disbelief,” Lee continued and recounted her feelings, “What’s regretful is that today, what I got after waiting is not a word of apology from Leehom, but an attempt to bribe me in a commanding tone, and his father’s defamation. He [Leehom] said, “Give you the [Wujiang] condo [where you stayed with the kids] and you tell the media today that your accusations were groundless.””

Berates Leehom’s Lack of Remorse
“I was really chilled to the bone when I saw it, until now [he] has not felt any remorse, and as usual wanted me to help him cover up his wrongdoings, as usual he hides behind his family and friends to hurt me maliciously. The price to pay for having a place to live with the kids is to publish a post lying to the public that I’ve not been thinking clearly? This is unbelievable, and also surpasses moral grounds,”  Wujiang, the apartment mentioned is a $400 million luxury mansion located at Taipei’s Ren’ai road.

Sordid Details + Wanted Her to Get An Abortion After
Rebutting the claims made by Leehom’s father’s, Lee pointed out that “Using [her] pregnancy to threaten marriage, otherwise [I’d] wreck Leehom’s career by telling all” is a very ludicrous accusation. Detailing how she had dated Leehom with marriage in mind, she shared that Leehom had told her that he was eager for marriage and children, and said the kids could fly along with them on his work trips so he would not feel alone. Lee added that the couple hence did not practise contraceptive measures in the long term, and that the singer would ejaculate directly during intercourse while the two were dating.

Lee Jinglei also mentioned that following her pregnancy news, Leehom initially responded happily, but after discussions with the family, he actually told her, “So…can you [have an] abortion? Or you give birth to the child, we don’t get married?”

Rebuts Claims One By One

Responding to Wang Da-Chung’s claim that she had requested hundreds of millions of Taiwanese dollars worth in living expenses, two Filipino helpers, a nanny and a personal driver, Lee rebutted that her only request was to allow the three children’s quality of life to “remain unchanged”, to not dismiss one of the family’s Filipino maid, a nanny who usually helps out at night and the driver. She clarified that she did not request billions NTD, and did not ask for a single cent of alimony fees. As for the elder Wang’s rebuttal that his son was not adulterous, she said her piece succinctly in a thirty-nine word response, “This will be hard for Wang’s father to know, since he won’t tell you if he commits adultery, just like he didn’t inform you if that he solicited prostitutes right?”

Lee also described how the couple had tried different ways of living in “harmony”, particularly in the last two years, when Leehom had the liberty of leaving and returning home whenever he pleased; and she would also not ask about how he spent his time outside. This happened after his 2019 concert at Taipei Little Giant Egg, when he tried different ways to force her to agree to a divorce, following which the couple tried to work out a consensus to let Leehom lead the bachelor lifestyle he desired, while living as normal a family life as they could.

Threatens Legal Action
Finally, Lee Jinglei requested Wang Leehom to apologise publicly by 3pm of December 19, or she would raise defamation charges against him and his father.

An insider claimed that Lee Jinglei was purely motivated by money in her actions.