An anticipated pairing since their chemistry as enemies-turned-lovers sizzled up screens in office romance Love is Sweet <半是蜜糖半是傷>, fans are thrilled for sparks to fly again between Leo Luo Yunxi (罗云熙)and Bai Lu (白鹿) in upcoming Youku-produced xianxia romance Till the End of the Moon <長月燼明>. 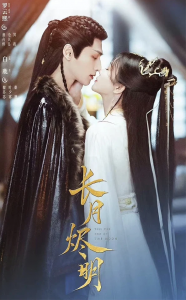 One of the most popular costume stars in C-drama, Luo Yunxi appeared to have found his niche in period dramas after maneuvering career tracks, as he consistently wows viewers with steady acting chops and screen charm in historical costumes. Actress Bai Lu was similarly praised for her suitability in carrying off ethereal red outfits best, after she stunned in ancient romance One and Only <周生如故>.

Adapted from web novelist Teng Luo Wei Zhi’s (藤蘿為枝) xianxia novel Black Moonlight Holds the BE script <黑月光拿穩BE劇本>, Li Susu (Bai Lu) had once miraculously escaped the clutches of the demon lord (Luo Yunxi). To trace the origins of the evil lord and thus stop his descent into inhumanity, she was tasked on a mission to travel back in time by 500 years, where reincarnated as the domineering general’s daughter Ye Xiwu,  she found herself married to the future demon king Tan Taijin.

Knowing that he will later cruelly massacre the masses, she tried every trick to make him fall madly in love with her – fervently hoping to purge his demon roots so she can change destiny. Seeing an opportunity, she stabbed a deadly nail into his heart but unfortunately failed. Tan Tanjin flew into a seething rage, and she was forced to exchange part of her fairy soul for his demon root, sacrificing herself in the process. Realizing he has lost the love of his life, he began his search for her soul in the underworld for the next 500 years.