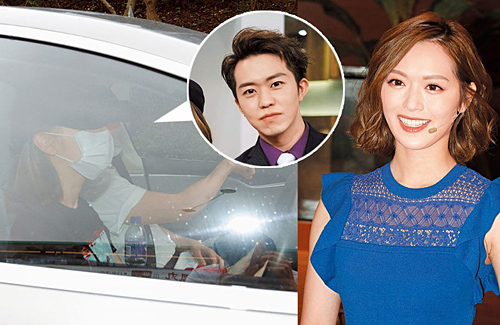 Ever since 25-year-old Crystal Fung (馮盈盈) broke up with her long-time boyfriend, her love life has been under close scrutiny. Recently, she has been rumored with different men, including variety show host Leonard Cheng (鄭衍峰) and rich heir Arnaldo Ho (何猷亨). She was last seen at Arnaldo’s yacht party which she denied was a date but rather a gathering with friends. On the other hand, Crystal seems increasingly intimate with Leonard, who was speculated to have spent the night at her home recently.

Known for putting love above everything, Crystal does not mind that Leonard is not handsome and does not have an established career. After merely three months of dating, she has allegedly allowed him to move in with her, drives him around, and allows him to drive her Tesla. They are suspected to be living together, when Crystal and Leonard posted to their Instagram stories pictures of their meals with the same gold filigree place mat.

One night after filming, Crystal was seen rushing to pick up Leonard. As she drove her car into the garage of the shopping mall next to her residence, they discovered the paparazzi. Leonard nervously got off and ran into the shopping mall to take the elevator. Instead of parking, Crystal drove back to her residence next door. Obviously, Leonard did not want to be photographed going to Crystal’s home and went through another entrance to access her building.

Though their faces were fully covered by masks, the man in the photograph has the same backpack as one that Leonard was previously seen carrying in his Instagram photo.

Before becoming involved with Crystal, Leonard had attempted to pursue his Fun Abroad < 3日2夜> co-host Judy Kwong (鄺潔楹). Though initial reports claimed that he came from a wealthy family in Canada, the University of British Columbia graduate is only from a family with modest means.