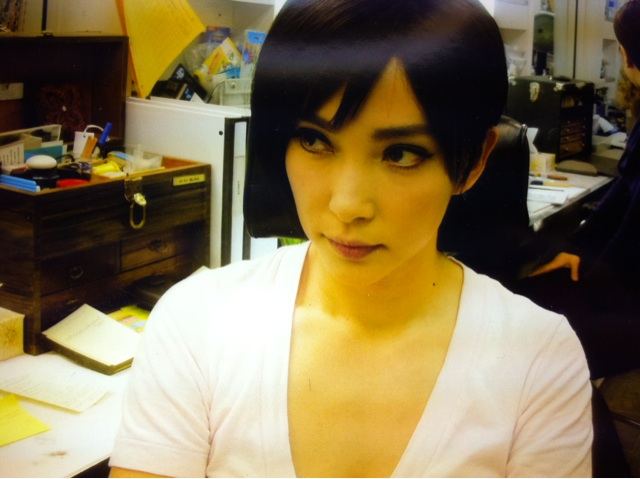 Li Bingbing’s (李冰冰) dream to enter the Hollywood film market will not be broken despite losing the chance to star in Bond 23, the new James Bond movie. In fact, Li Bingbing will be starring in another Hollywood hit,Resident Evil: Retribution, portraying the popular and sexy game character, Ada Wong. Resident Evil: Retributionstar, Milla Jovovich, posted on Twitter a photo of Bingbing in her new short hairstyle for her upcoming role.
Winning the 2008 Best Actress Award at The People’s Hundred Flowers Awards, which was equivalent to China’s Golden Globes,  Li Bingbing was absent at yesterday’s opening reception for the 2011 Golden Rooster and Hundred Flowers Film Festival. Bingbing had quietly flown to Canada to film Hollywood blockbuster, Resident Evil: Retribution. Since starring in Snow Flower and the Secret Fan, Bingbing will be officially filming her first trueHollywood debut this time.
Yesterday, Bingbing posted a photo of the filming set of Resident Evil: Retribution on her blog, “Today was my first day of the shooting, which took me by surprise since I did consider that I would be filming a genuine fight scene. It was really exciting! Earlier, I underwent gun training, but I was still a bit shocked by the intense gunfire. Fortunately, I was wearing earplugs. I like Ada Wong with force!” Bingbing also revealed that she was unaccustomed to the coldweather in Toronto and thus came down with a fever.
Resident Evil: Retribution star, Milla Jovovich, uploaded a photo of Li Bingbing in her new short hairstyle, which was taken in the dressing room. Milla indicated that she was unable to reveal Bingbing in her full length costume; otherwise “big trouble” may start. It was not known whether Bingbing had indeed cut her long hair, a preference which she kept for many years, for her role of Ada Wong. Nevertheless, many netizens praised Bingbing’s new look as being sexy.

The reporter contacted Li Bingbing’s manager, Li Xue (李雪), who was currently in Canada. Li Xue indicated that Li Bingbing’s recognition level increased dramatically after the release of Snow Flower and the Secret Fan. Since Director Paul W.S. Anderson realized that Bingbing had a free spot in her schedule, he immediately cast herin Resident Evil: Retribution, requiring her to undergo rigorous training for the role of Ada Wong.
Although Li Bingbing was initially rumored to be the top five finalists to be considered for a role in the new upcoming James Bond movie, Bond 23, she may lose the opportunity to star in the film. Li Xue stated, “From what Iunderstand, Bond 23 may change its script, making a Chinese actress not a good fit for the role. The director may not choose to cast a Chinese actress after all.”
Source: Oriental Daily
Jayne: Wow, I did not know that Li Bingbing was one of the finalists considered for the new James Bond movie, although the casting decision may be changed causing her to lose the opportunity to star in another Hollywood role. Li Bingbing may indeed be the next Chinese actress to make a sensation in Hollywood!