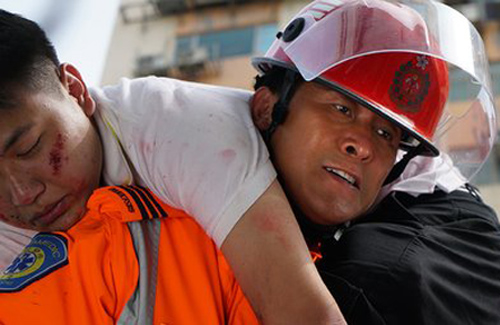 TVB unveiled the ratings report for the week ending November 11, and Life on the Line <跳躍生命線> was a huge success with the final week hitting 31.1 points in ratings. The finale episode peaked at 33.5 points. The series averaged 29.3 points, making it the highest rated drama of 2018 so far.

The success of Life on the Line can be attributed to three factors. One, Joe Ma (馬德鐘) has been absent from Hong Kong television for quite some time, choosing to focus his career in China instead. His strong, manly appearance coupled with his previous career in law enforcement made him a great fit for the role of a family-oriented paramedic with strong values. Second, the drama is a refreshing theme for viewers who may not be familiar with the daily duties and life of a paramedic. Third, the drama does not place too much emphasis on the romantic side stories which allows the main focus to be on the general life of paramedics. There was an enjoyable balance between the themes of romance, family, and brotherhood. The ultimate death of Bob Cheung’s (張彥博) character also tugged at the audience’s heart strings.

Other than Life on the Line, OMG, Your Honour <是咁的，法官閣下> is also doing well. The drama’s second week of broadcast averaged 23.6 points, a slight increase from the premiere week’s rating of 23.3. Reviews of the drama have generally been positive however it does not seem to be translating to ratings. The second installment of travel show: Think you know Tokyo? <周遊東京> made its debut. Although the first installment had great reviews, the sequel only received 19.7 points.