Above: Joe Ma just returned from his vacation to Tibet with wife, Karen Cheung.

On October 14, TVB held its annual light switching ceremony, and promoted its three anniversary dramas Life on the Line <跳躍生命線>, OMG, Your Honour <是咁的，法官閣下>, and Fist Fight <兄弟>. Joe Ma (馬德鐘), who just returned from Tibet, appeared as Life on the Line’s representative along with co-star Kelly Cheung (張曦雯). It was his first time promoting the drama after it began broadcasting. 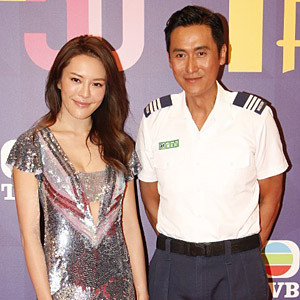 Smiling, Kelly expressed she has been looking forward to Joe’s return. “[The cast and I] don’t have to uphold the fort and carry around his cardboard cutout anymore. We feel more at ease,” the actress said.

Sharing his thoughts on the public’s reaction to his first TVB series in over two years, Joe expressed his happiness to the audience’s receptiveness to each episode’s thought-provoking commentary at the end. “It’s also my personal favorite,” the actor shared. “I told the scriptwriter I really like that type of thing, and now the audience also likes it – they have the same notion as me.”

Kelly, who plays Joe’s romantic interest in the drama, agreed, “Whenever I hear that part, I become emotional.” In fact, she cries every time she watches an episode because of Joe’s storyline. “He makes people very invested in acting as a member of the police or this type of professional,” the actress added. “He bleeds the blood of a [paramedic].”

Life on the Line also impacted Joe by sending him the message that life is unpredictable. After the drama’s filming completed, he did a bit of reflecting before deciding to go to Tibet with his wife, Karen Cheung (張筱蘭), to experience life. However, the couple both experienced altitude sickness. “People are so fragile; despite how strong your will is, in the end, it’s still up to heaven,” Joe expressed.

The actor shared he already started feeling sick when he reached 9,800 feet in altitude. Still, he chose not to receive supplemental oxygen, as it would be impossible to go higher afterward. “You have to slowly adapt to the low oxygen. I was showing the symptoms of a headache and the urge to vomit. My wife also had altitude sickness, but fortunately we experienced the symptoms at different times, so we were able to take turns taking care of each other,” he said.

This article is written by Melody C for JayneStars.com.