Linda Chung and Edwin Siu Kiss Underneath A Table 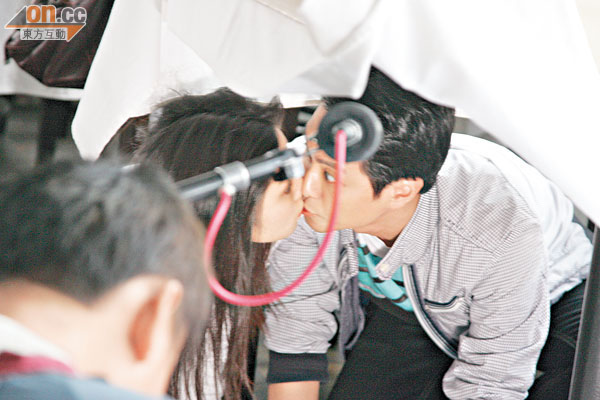 Steven Ma, Linda Chung, and Edwin Siu filmed at a restaurant in the Tsim Sha Tsui district yesterday. In Lucky Father, the trio was embroiled in a love triangle. In the scene filmed, Linda realized that Steven’s character possessed a cough and offered a piece of candy to him. However, Linda accidentally dropped the candy and when Edwin tried to pick up the candy, he “accidentally” kissed her on the mouth instead!

Asked whether he had refreshed his mouth prior to the kissing scene, Edwin laughed, “No, there’s no need to do so.” (Did it feel good to kiss Linda?) “Why don’t you ask her?” Linda replied, “We only brushed lips lightly. This is a light-hearted comedy, so there will not be any overly passionate scenes.”

The reporter asked Linda whether she had tried to comfort rumored ex-love, Raymond Lam (林峯),after he admitted in suffering hurt feelings [since bed photos with Mavis Pan 潘霜霜 surfaced]. Linda said, “I hope he recovers soon. It is good for a young man to have more experience.” (To make Raymond more mature?) “Yes, that applies too.”  (Did Linda offer Raymond her sympathy?) “If we were to see each other and he mentions the issue, then I will offer my sympathy.”

Steven Ma revealed that he will be heading to mainland China for filming later and thus, will not be attending the TVB Anniversary celebrations. Asked about the progress in discussing his early contract termination with TVB, Steven noted, “TVB put in a lot of efforts to discuss the matter with me. The process has been enjoyable. I hope that the path for the future will be settled prior to my mainland trip. Once a decision has been reached, I will announce it to everyone.” (Did City Telecom’s Chairman, Ricky Wong 王維基, seek you out?) “I did meet with him and consider it as a chance to meet a new friend.”

During an outtake scene between Edwin Siu and Linda Chung, a production crew member wanted to induce a relaxed atmosphere and joked, “Relax, someone please hurry with the ‘parting glances’ (離別秋波)!” Upon which, Steven Ma immediately corrected, “It’s not parting, but impending departure (臨別秋波) instead!” Steven’s words were full of overtones! Jayne: Edwin Siu appears to be promoted to supporting actor and taking on roles of greater significance. Do you support Edwin taking on larger and perhaps even leading roles?