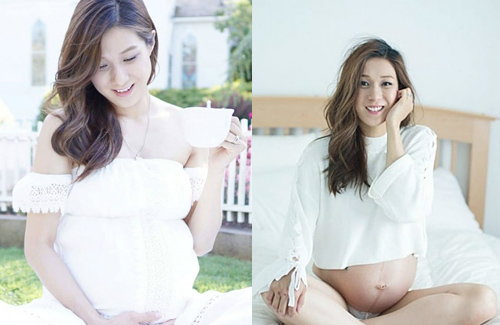 Recently, it was reported that Linda Chung (鍾嘉欣) has already given birth to a baby boy and is currently resting at home. However, she has not publicly admitted or shared the news yet. Her good friends have also been tight-lipped about the matter. Grace Wong (王君馨) said, “I don’t know yet. I’m waiting for Linda’s good news!” Leanne added, “Let’s wait for Linda to announce the good news herself. Thank you!”

Sharing photos of her bulging belly on Instagram earlier, Linda revealed that her baby is due to arrive soon.

Since becoming pregnant with her second baby, Linda has significantly reduced her workload and even ended her 13-year work relationship with TVB. It was inevitable as Linda wants to spend time with caring for her two-year-old daughter, Kelly. Since becoming a mother, has only been working intermittently and making short trips to Hong Kong.

After attending a short event in Hong Kong in May, the 34-year-actress has not made a public appearance since. She has been staying in Canada to rest. Although her husband, Jeremy Leung, initially hoped to keep the gender of their baby a secret, Linda could not contain her excitement and shared with fans in July that the couple was expecting a baby boy. Going through pregnancy at the same time as her good friend, Leanne Li (李亞男), further fueled the expectant mothers’ excitement.