Linda Chung on Second Pregnancy: “It’s a Big One” 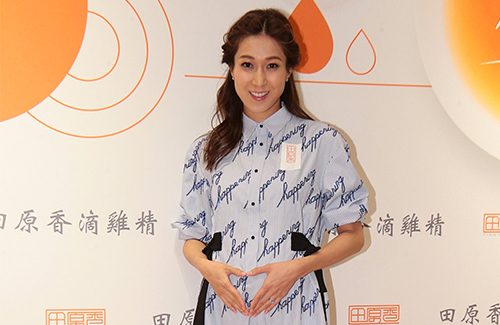 Another baby is on the way for Linda Chung (鍾嘉欣), and it’s going to be a big one.

The youthful mother of one attended a brand event yesterday, wearing a shirtdress that flatters Linda’s tall and fit figure. In March, the former TVB actress announced on social media that she is expecting her second child with husband Jeremy Leung. Linda and Jeremy’s first child, daughter Kelly, was born in August 2016.

Unlike her first pregnancy, which she kept private, Linda happily opened up questions for the reporters to ask her about her second pregnancy. Linda shared that when she first got the pregnancy symptoms, she thought she had caught the flu. Fortunately, a quick check-up at the hospital confirmed the pregnancy.

Linda remarked that her second pregnancy has been just as clumsy as her first, but she has definitely gained a lot of wisdom and experience from her first pregnancy. She recently went to get an ultrasound, and her doctor told her that the baby is growing well and healthily. “It’s going to be a big baby!” Linda added with a laugh. Linda and her husband told their doctor to make sure not to reveal the gender of the baby to them. “We want the surprise!” she said.

The Brother’s Keeper <巨輪> star also talked about her first experience breastfeeding Kelly. She highly advocates for breastfeeding, expressing that not only is breastmilk healthy for infant, it is also a time for the mother and infant to bond. “You would really start to feel that relationship between mother and baby,” she said. “So that’s how a mother’s love feels like. Even after the baby grows older, that feeling will not change.”

Linda also shared that Kelly started to eat solid foods at six months old. She was responsible for preparing the meals for her. “You do learn a lot from cooking for your child. You learn how to  see things in a different perspective.”

6 comments to Linda Chung on Second Pregnancy: “It’s a Big One”