Linda Chung Was Chased by Men with Knives: “I Thought I Would Die!” 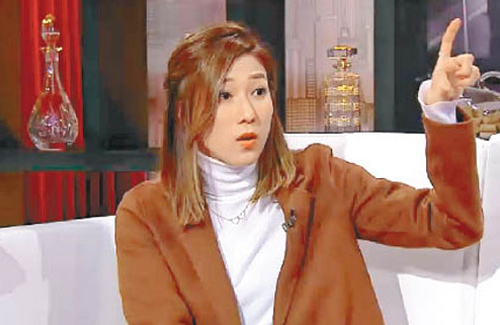 While filming 2006’s The Biter Bitten <人生馬戲團>, Linda Chung (鍾嘉欣) and Shirley Yeung (楊思琦) were separated from the crew for hours, prompting gossip that the actresses were robbed.  Having kept her secret for the past decade, Linda finally opens up and reveals that she had suffered from Post-traumatic Stress Disorder (PTSD) after the incident.

The cast and crew had filmed on location in Mainland China for The Biter Bitten. After wrapping up filming one night, the group went to late night karaoke to celebrate Shirley’s birthday. Leaving the karaoke bar at 1 a.m., Linda and Shirley originally wanted to flag down a taxi to go home. Unfortunately, when they stepped onto the curb of the pavement and was about to get in the cab, more than a dozen men came running after the two women with knives and blades.

Spilling the secret after 10 years on the variety talk show, Wanna Bros <娛樂3兄弟>, Linda recalled that scary night, “Everyone left and there were only 10 of us there. I was in a rush and when I opened the door of the taxi – 10 to 20 men came running at us with big machetes. They had their arms raised and yelled, ‘Don’t run!’, in Mandarin. I thought they were coming after us. When we ran into a dead end, I thought I was going to die for sure!”

Luckily, during the chase, Linda and Shirley hid between large garbage disposal bins in an alleyway. The drama’s production assistant finally found them hours later.

After the frightful night, Linda suffered from PTSD and would scream and cry every time she heard a cab door opening and closing. Linda sighed, “Every time I heard taxi sounds, I cried from fear. It only got better after half a year. I’m pretty sure the [gang members] got the wrong people.”

Initially, the public suspected that the cast of The Biter Bitten was simply robbed. The media was unable to find any information on Linda and Shirley’s mysterious disappearance for a few hours and many believed that TVB’s upper management team gave strict orders to prevent them from talking about the incident.

When asked if TVB executive Virginia Lok (樂易玲) knew about her revealing the incident, Linda simply replied, “It’s been a long time, and it didn’t happen in Hong Kong. It’s been so long – it doesn’t matter anymore!”

9 comments to Linda Chung Was Chased by Men with Knives: “I Thought I Would Die!”