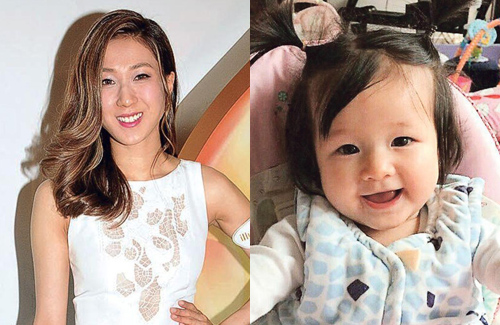 Since giving birth last August, Linda Chung (鍾嘉欣) has been residing in Vancouver and only flying back to Hong Kong occasionally for work engagements. Appearing at a promotional press conference recently, Linda revealed that she is recording the subtheme song for Heart of Greed 3 <溏心風暴3>.

“It has been a long time since I last recorded a song, so there’s a bit of uneasiness. I composed a few new songs, and one of them is called ‘Mom Wakes up Early in the Morning and Stares at Me’. The lyrics are already written. It’s a children’s song and can be incorporated into commercials. I’ve discussed it with my husband. If there is a suitable brand where I can film a commercial with my daughter, she can use it as a keepsake for memories.”

Linda could not stop gushing about her daughter. Currently nine months old, Kelly is already starting to form words. Linda shared, “On April 17, Kelly said the word ‘Mama’ for the first time. A few days later, she said ‘Dada’. She also learned to say ‘Hi’. Right now, she knows how to stand. There are so many changes every day. She is very happy and a lot of fun!”