When Lynn Hung (熊黛林) broke up with Aaron Kwok (郭富城) in 2012, many pitied the model for wasting seven years of her youth in their dating relationship. But letting go of Aaron allowed Lynn to find a man who cherished her much more. Meeting Ken Kwok (郭可頌) in 2014, Lynn got married two years later and gave birth to twin daughters in April. Always placing Lynn as his top priority, Ken is known for being generous in love and even bought a luxury condo for Lynn’s mother to stay in Hong Kong.

The younger brother of Kenix Kwok (郭可盈), Ken inherited the Kwoks’ family business and is worth $10 billion HKD. Although he has a demanding business to run, Ken makes sure to spend time with Lynn, often clasping her hand and holding her bags when they are out together.

While they were dating, Ken gave Lynn many gifts, including a Porsche. Lynn never asked Ken to buy her things, but he was always a generous lover. He also did not mind spending $200,000 HKD for Lynn’s hospital stay to ensure she is provided the best care in a VIP room after giving birth. 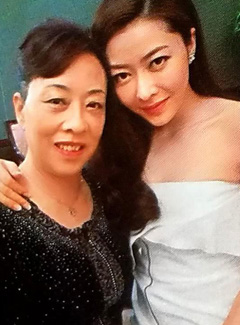 Extending his generosity to Lynn’s mother as well, Ken recently purchased a condo for her to live in. Although previously living in Mainland China, Lynn’s mother will spend more time in Hong Kong to take care of the new babies. Ken said he wanted Lynn’s mother to always have a home in Hong Kong when visiting. Mother and and daughter were delighted by Ken’s suggestion.

After giving birth, Lynn has been drinking cordyceps soup every day to help nourish her body back to health. Although Ken hired two nannies to help out, taking care of the newborns still proved to be a challenge for Lynn.

Coming down with Mommy’s Wrist because of frequently lifting of the babies during breastfeeding, Lynn emerged out of her postpartum confinement yesterday to see a doctor. Reporters asked if Lynn is not used to holding the babies as a new mother. She said, “Yes!” The interview was cut short as Ken emerged with his car to drive Lynn home.

Flashing her bandaged wrists on social media, Lynn wrote, “In pain and happiness.” Although Lynn’s wrists may be hurting now, her husband’s attentive care and love should make it all better.