The COVID-19 pandemic and stay-at-home measures have affected the entertainment industry a great deal. Many public events and filming projects have been canceled, and celebrities are getting huge pay cuts.

In desperate measures to find other means to earn income, many celebrity moms have taken their focus to the Internet. Changing their roles to KOLs—another word for social media influencer—celebrity moms are making a living through streaming and endorsing bay products.

Many of the celebrity moms are easily earning six figures through streaming, and Tavia Yeung (楊怡), who just gave birth to her daughter “Little Pearl”, is by far the highest-paid celebrity mom, earning over HK$150,000 per endorsement. Although it’s been a while since she’s last appeared in a drama, Tavia still remains to be a popular celebrity endorser. Her income had only increased after her daughter’s birth.

Vivien Yeo (楊秀惠), who gave birth to daughter Vy in April, is earning at least HK$80,000 per endorsement. Although she has already ended her TVB contract, Vivien’s popularity increased after the airing of Brutally Young <十八年後的終極告白>. Currently back in Malaysia, Vivien has been earning a lot of income through promoting products on social media.

Aimee Chan (陳茵媺), now a mother of three, may be a full-time stay-at-home mom, but that hasn’t stopped the income from streaming in. Aimee is paid HK$80,000 per endorsement. 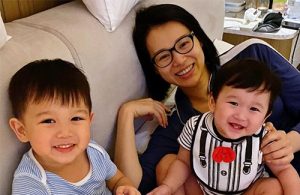 After giving birth to son Hunter in April 2019, Gaile Lok (樂基兒) has slowed down her work output. However, she continues to earn a decent income through social media, earning HK$60,000 per endorsement.

New mother Toby Leung (梁靖琪), on the other hand, is asking for HK$50,000 per endorsement. Her son is now over four months old, and Toby shares that she is looking forward to be by her son’s side as he reaches his developmental milestones.

Lynn Hung (熊黛林) is also earning HK$50,000 per endorsement. She has twins Kaylor and Lyvia, and enjoys playing dress-up with her daughters.

Stephanie Che (車婉婉) gave birth to her son, Justus Quinlan at 42 years old. Nicknamed “BBQ”, her three-year-old son already has a team of fangirls. Stephanie is earning HK$40,000 per endorsement. Leanne Li (李亞男), who gave birth to daughter Gabrielle in 2018, is also asking for HK$40,000 per endorsement. Aside from sharing tidbits of her life as a mother, Leanne has also become a KOL in housemaking and cooking.