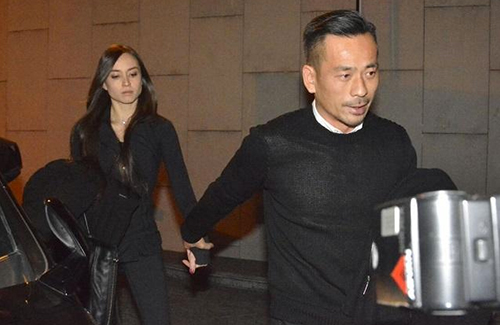 Macau business tycoon Alvin Chau (周焯華) and Hong Kong model-actress Mandy Lieu may be expecting their second child together. The news was revealed after Alvin’s wife of thirteen years, Heidi Chan (陳慧玲), announced that she was filing for divorce.

Alvin and Heidi first met in 2000, when Heidi was only nineteen years old. At the time, Alvin was going through a divorce with his ex-wife; they had one son together, Pakco (周柏豪).

The Macanese tycoon’s business reached new heights after his marriage with Heidi in 2002. Besides successfully expanding his casino business, he also co-established an entertainment agency, Sun Entertainment Culture Limited, which manages artists such as Stephy Tang (鄧麗欣), Fiona Sit (薛凱琪), and Andy Hui (許志安). Heidi had an executive position within the company.

Alvin’s extramarital affair with Mandy was exposed in August 2014, when they were spotted attending multiple dinner gatherings together. Heidi initially refused to comment on the matter, but she ended her silence in March 2015, when she called Mandy a “casual fling” for Alvin.

But things took a dramatic turn after both Heidi and Mandy gave birth to Alvin’s daughters in May 2015. Unable to get over Alvin’s infidelity, Heidi suggested divorce. Allegedly, Alvin had refused to separate, but Heidi was persistent. On December 18, Heidi confirmed in a phone interview that she has filed for divorce from Alvin; this announcement came after photos of Alvin holding Mandy’s hand in public were published by a gossip magazine.

On December 20, Alvin was spotted at the Hong Kong International Airport with son Pakco and eldest daughter, Virginia (周梓潼). Alvin shared that they were going on a family trip to Japan. Heidi, however, was nowhere in sight.

Alvin refused to respond to questions in regards to his ailing relationship with Heidi, saying, “There is nothing to say.” Asking if Mandy is indeed pregnant with her second child, Alvin said, “I don’t know.”