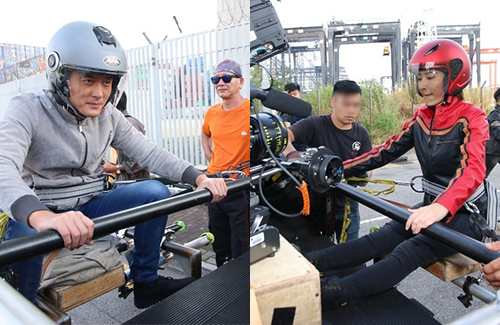 Mat Yeung (楊明) and Jeannie Chan (陳瀅) have been hard at work to film their new TVB drama Colleagues Do Great Things <伙記辦大事>, even to the point of having to face their worst fears.

Last week, the duo were called to shoot an intense motorcycle chase sequence for the new comedy drama. Though both Mat and Jeannie have had prior experience in the motorcycle, both of them requested for body doubles to complete the scene.

Jeannie shared, “I did attempt to get a motorcycle license before, but I failed the first round. I’m actually really afraid of two wheels. I have no problems with four wheels though! Many of my colleagues like to say I am a racing god. If I do somehow end up getting a motorcycle license, I’ll do my own stunts!”

Mat, on the other hand, does have a motorcycle license, but it’s been several years since he’s last driven one. He shared, “The accident that happened a few years ago has left a shadow in me. I don’t even have my motorcycle anymore, but I’ve been itching to buy one again.”

While Mat has managed to overcome his fear of motorcycles, he finds that he is still not ready to ride them for dramas. “The producer doesn’t want me to get hurt, and I can understand that. It’s been a while since I’ve last driven one, and I haven’t had practice.”