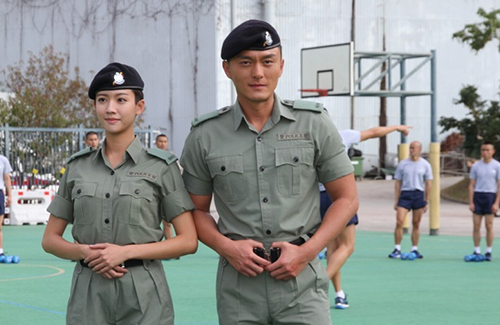 “[The most memorable scene] was when the both of us experienced getting pepper sprayed,” said Mat. “We already knew about this scene before filming started, and we really wanted to experience it ourselves. Our producer really supported our decision, but when it came to filming the actual scene, the police on set urged us to reconsider, because getting sprayed is not something that anyone would want to go through.”

Sisley agreed and shared, “I was sprayed in the eyes. The training required me to read a large poster before I could wash my eyes. When I was trying to read the poster, I felt completely numb. I felt so dizzy. I was literally using all the energy I had in my body to open my eyes and read the poster. When I went to wash my eyes, I felt like I couldn’t breathe. If I breathe through my nose, I’ll choke. I felt like I was wearing Monkey King’s golden band on my head.”

Though Sisley was told that the pain would fade out in 30 minutes, her eyes were still red and swollen the next day.

Mat had it slightly easier, as he was just sprayed on his forehead. Nonetheless, his eyes still stung, and he felt like his face had been washed with spicy chili.

The film, which centers on a team of PTU officers, also stars Max Cheung (張達倫) and Andrew Yuen (袁文傑).